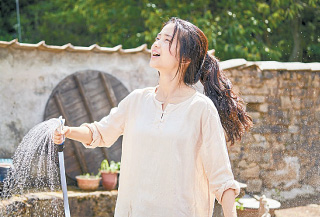 Tests, relationships, employment…with nothing going according to her plans in Seoul, Hye-won puts everything on halt and comes back to her hometown to meet her old friends, Jae-ha and Eun-suk.

Each friend has their own reasons for coming back or staying in their hometown when everyone else is leaving: Jae-ha came back to live a different life from others, but Eun-suk daydreams of a breakthrough from normal country life.

The three friends make their own meals with the crops that they grow, and the memories between the three of them build as they spend the four seasons together. After a year with her friends and family, Hye-won realizes the real reason behind why she came to her hometown and finally makes the first brave step to start a new spring in her life.

The three friends Hye-won, Jae-ha and Eun-suk are played by renowned actors Kim Tae-ri, Ryu Jun-yeol and Jin Ki-joo. The director of the film, Yim Soon-rye, is also known for her works “Forever The Moment” (2007) and “The Whistleblower” (2014). The film is based on the Japanese comic series “Little Forest” by Daisuke Igarashi.

The Princess and the Matchmaker (12)

The times are bad in the Joseon Dynasty (1392-1910), when a series of droughts and famines have hit the country. The king firmly believes that the marriage of his daughter, Princess Songhwa, will somehow resolve all the misfortunes fallen upon his country and end the droughts once and for all.

However, the princess has already been rejected several times, and the king hires the country’s best matchmaker, Seo Do-yoon, to determine the princess’s compatibility with candidates.

But the princess has her own ideas about marriage, and is determined to find out more about her husband-to-be rather than leaving her fate in the hands of the matchmaker. So she steals the letters from the house of the grooms containing their names and fates and sets out to meet them in person. Seo, having never met the princess, believes that she is a court maid and chases her out the palace to get the letters back.

The matchmaker and Princess Songhwa are played by renowned actors Lee Seung-gi and Shim Eun-kyung, while the three candidates for the groom are played by actors Yeon Woo-jin, Kang Min-hyuk and Choi Woo-sik. 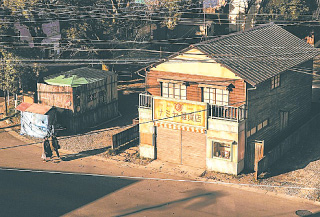 The Miracles of the Namiya General Store (All)

Three street friends - Atsuya, Shota and Kohei - plan to raid an abandoned general store, and creep into it one night. There, they discover a letter in a mailbox that was written 32 years ago. The letter contains the author’s worries and attempt to seek advice from the recipient.

Deciding to have fun, they reply to the letter but soon discover that the store’s mailbox is a time machine that can send and receive letters from 32 years ago.

Just when they realize that the letter they’ve written back has affected the present, another letter arrives at the store.

Thus begins an exchange of letters between the past and present, and the three kids find that what is happening is no mere coincidence, but an act of fate.

The film is based on a famous 2012 Japanese novel by Keigo Higashino.

“Die, or become a sparrow.”

Dominika Egorova is a prima ballerina with beauty and talent, but her dreams are shattered after she suffers an injury from which she cannot recover. Having to look after her sick mother, she receives a tempting offer that she cannot resist, and is lured into becoming a “sparrow,” a Russian intelligence operative.

After receiving her training, Dominika is reborn into a red sparrow, and she seduces an American CIA agent to find out the identity of a double agent in the organization. However, the American agent tries to persuade her that he is the only person that she should trust.

Dominika is played by Jennifer Lawrence, known for her role in “The Hunger Games” series (2013-2015), whose director, Francis Lawrence, is also the director of this film. His other famous works include “I am Legend” (2007) and “Constantine” (2005).

Kei Nagai was an ordinary medical student who wanted to become a doctor to treat his sister’s illness. But he is identified as the third official “Ajin” by the government when he comes back to life after dying in a car accident. The Ajin are a new species that become stronger each time they die.

The government believes that the Ajin are the key to the next step in human evolution and secretly conducts ruthless medical experiments on them. Kei is brought to the lab and tortured until he escapes when a terrorist, Ajin Sato, attacks the facility.

Planning revenge on humankind and the Japanese government, Sato rounds up all the hidden Ajin in the country and Kei, who sides with the humans, attempts to fight Sato and save the world.

In 1971, the United States is scandalized when The New York Times publishes the “Pentagon papers,” a 7,000 page-long document that shows how the government tried to keep information about the Vietnam War from the public.

After its release, the government bans any related reports, but the editor of The Washington Post, Ben Bradlee, risks everything to obtain the original classified documents that contain the truth behind the Vietnam War. After he succeeds, he goes to Katharine Graham, the first female publisher of The Post, to reveal what he has found, and she, too, must risk her company and her own safety to make a decision that will change the world.

The roles of Katharine Graham and Ben Bradlee are played by veteran actors Meryl Streep and Tom Hanks. 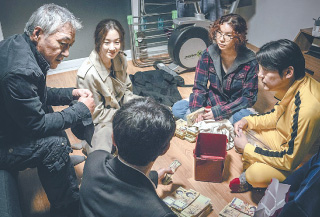 An unemployed designer in danger of being sold into prostitution due to the large sum of money her younger sister owes, her father who is fresh out of prison, a former prosecutor who lost his memory in an accident and a young man in dire need of cash to get his mother the treatment she needs all team up to devise a heist.

The cast of thieves comprise well-known actors Jung Ryeo-won, Im Chang-jung, Jung Sang-hoon, Lee Kyung-young and Kim Do-hoon. The film received attention before its premier as it was said to be inspired by the Choi Soon-sil scandal. 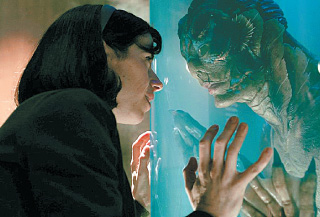 A mute cleaning woman named Elisa Esposito lives a dull, orderly life in a hidden, high-security government laboratory in 1962 Baltimore during the Cold War between the Soviet Union and the United States. Elisa’s only two friends are her co-worker, Zelda, and her next-door neighbor, Giles, who is a poor advertisement illustrator.

One day, the facility receives a mysterious new guest - a humanoid amphibian who has been captured from a South American river.

Having been judged reliable to not spill secrets because she is mute, Elisa is sent to the lab to clean. There, she begins to bond with the creature through sign language and music. When scientists discover that the being is capable of communication, they plan to dissect it to understand how it works. Meanwhile, Elisa falls in love with the creature and she and her friends plan its escape.