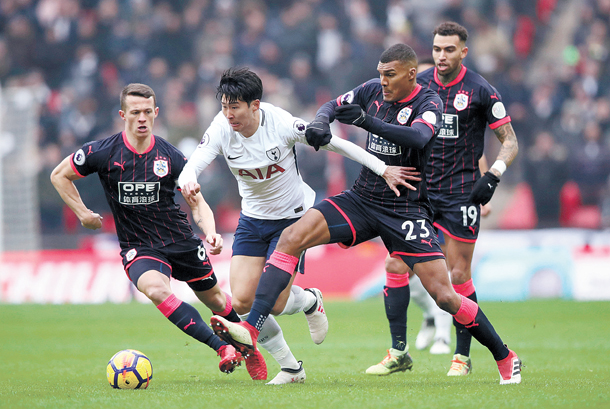 Son Heung-min of Tottenham Hotspur had another multi-goal match on Saturday against Huddersfield Town at Wembley Stadium, leading Spurs to a 2-0 victory.

Son, who played the match as left striker, scored in the 27th minute, giving the Spurs a 1-0 lead. Son scored with his left foot thanks to an assist by Dele Alli. Then, in the 54th, he scored another assisted by Harry Kane. Kane’s cross from the right side of the field was placed in the perfect spot for Son to score with a header.

On Feb. 14 and 25, the Spurs’ head coach Mauricio Pochettino started Erik Lamela as left striker over Son. Coming off the bench proved beneficial for Son, as he scored multiple goals on Thursday during Tottentham’s round of 16 match in the FA Cup against Rochdale. Again on Saturday, Son proved his worth as a starter with another multi-goal match, scoring his 14th and 15th goals of the season.

This season, Son has scored ten goals in league matches, two during the FA Cup and three in UEFA Champions League matches. This is Son’s second consecutive season scoring goals in the double digits.

“It was a very difficult game,” Son was quoted as saying on the Hotspur website. “The most important thing was that we dominated the game from the start and at the end we deserved to win. Of course we want to score more goals but we are happy to get three points.”

At the end of the match, Son was given a 9.18 by Whoscored.com, a football statistics website, which was the highest score of the game.

“I feel so happy, very pleased,” Pochettino said. “The performance was good and I’m happy because the three points helps put us in very good position on the table. The team was very patient, I think we showed great qualities and we are so happy because now we are going to think only about preparing for the game against Juventus [on Wednesday in the UEFA Champions League].”

With a victory, Tottenham continues their 17-game no loss streak. Three points from the win allows the Spurs to retain their fourth spot in the English Premier League (EPL) standing with 17 wins, seven draws and five losses, at 58 points.

Ki Sung-yueng of Swansea City A.F.C. also had a great game, scoring a goal and an assist during a game against West Ham, helping Swansea to a 4-1 victory, at Liberty Stadium.

Ki, who started as Swansea’s midfielder, was the first to score for the club in the eighth minute. Then in the 32nd, Ki added an assist after Mike Van der Hoorn scored on a header. It was Ki’s second goal and assist of the season, and with a victory, Swansea is ranked 13th in the EPL with eight wins, six draws and 15 losses, totaling 30 points.

As the FIFA World Cup and the Asian Games are soon approaching, the strides of the Korean players in the foreign league are exciting news to both national team coaches and fans. The Korean national football team, led by head coach Shin Tae-yong, will play another friendly match in June before the final roster for the World Cup is decided.

Ki won’t be able to compete in the Asian Games due to the age limit, but Son will likely be added to the team by the new coach, Kim Hak-beom.