The prospect of talks about talks

The prospect of talks about talks 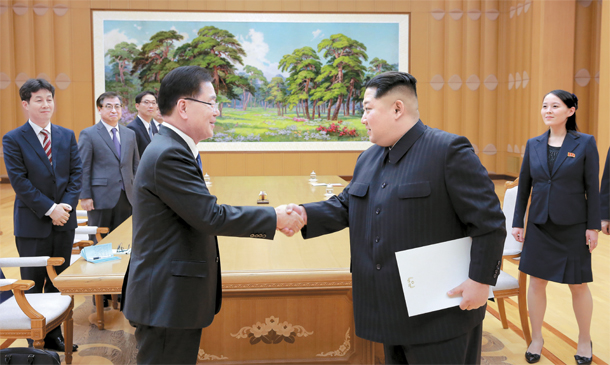 Chung Eui-young, head of the National Security Office and chief representative of the South Korean delegation, shakes hands with North Korean leader Kim Jong-un on Monday in Pyongyang after delivering him a letter from President Moon Jae-in. [AP/YONHAP]

A spokesperson from the North Korean Ministry of Foreign Affairs said on March 3 that Pyongyang was open to direct talks with Washington. “Out of the desire of our nation and international society aspiring after peace, we have clarified our position that a dialogue with the United States will be possible.” While rejecting the U.S. precondition that “it will have dialogue only for making the DPRK (North Korea) abandon nuclear weapons” as “really more than ridiculous,” the spokesperson further noted that “the dialogue we desire is the one designed to discuss and resolve the issues of mutual concern on an equal footing between states.”

Significantly, unlike many prior announcements, the statement did not rule out denuclearization as an eventual outcome, even while rejecting it as a precondition. Also significant was the “equal footing” assertion. A benign interpretation could simply mean “one sovereign state to another.” Less benign — and more consistent with prior North Korean demands — would be “one nuclear weapon state to another.”

In short, the March 3 statement may represent the long-awaited breakthrough opening the door for dialogue, or it may just be a change in tactic aimed at trying to get Washington to rescind its “maximum pressure” campaign (which was condemned in the statement) while achieving de facto recognition as a nuclear weapons state.

While my suspicions lie with the latter, the best way to find out is to talk with Pyongyang. While Washington has made it clear that formal negotiations with Pyongyang must begin with an agreement that the prospect of denuclearization is at least on the table, preliminary “talks about talks” would provide an opportunity for each side to test the other’s sincerity.

Prior to engaging in any discussion, Washington should reiterate its intentions: the United States remains committed to denuclearization on the peninsula, and any direct discussions, formal or otherwise, do not constitute recognition or acceptance of North Korea’s nuclear weapons and long-range missile programs, which remain illegal under numerous UN Security Council resolutions. Sanctions from the UN and United States will remain in place until the North comes into full compliance with its UN obligations.

Additionally, while bilateral dialogue is useful in addressing issues of mutual concern, no solutions regarding long-term peace and stability on the peninsula will be achieved without the full participation and consent of the South Korean government. “Equal footing” must apply to Seoul as well.

The U.S. delegation needs to be senior enough to receive assurances in advance that they will be able to meet with Kim Jong-un. A delegation led by Secretary of State Rex Tillerson and including National Security Adviser H.R. McMaster would demonstrate America’s seriousness while also being able to deliver a credible message (assuming, of course, that President Trump does not undermine this credibility with an ill-timed tweet).

As a goodwill gesture, the Trump and Moon administrations could also announce that the upcoming series of joint military exercises scheduled for April will be “defensive only” and not include any “decapitation” scenarios or Guam-based strategic assets such as long-range bombers. This would demonstrate U.S. sensitivity toward North Korea’s genuine concerns and demonstrate continued resolve by the United States and South Korea to defend the peninsula. Canceling or further postponing the exercises will be seen by Pyongyang as a sign of weakness that it will inevitably try to exploit. It will not serve the interests of deterrence.

Washington and Seoul also need to recognize that there is another player with a huge stake in this game: Tokyo. Prime Minister Shinzo Abe has been in lockstep with Washington over its maximum pressure campaign and needs to be brought into this process. Tokyo’s support is critical to show broader alliance solidarity and remind Pyongyang that efforts to separate Washington from either of its Northeast Asian allies will not succeed. It will also serve to remind Seoul that Japan still matters.

Pyongyang’s statement concluded that the United States “should not misjudge our intention for dialogue.” It is absolutely essential that North Korea not misjudge U.S. intentions, either. This requires a face-to-face meeting with Kim Jong-Un similar to, and in lockstep with, the South Korean delegation that precedes it.

*The author is president and WSD-Handa Chair in Peace Studies at the Honolulu-based Pacific Forum.