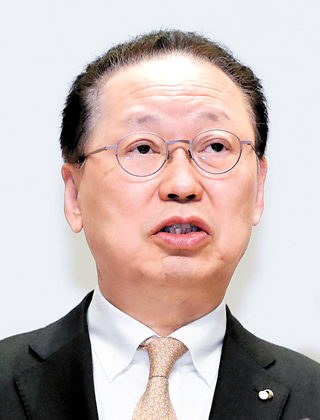 Financial Supervisory Service Governor Choe Heung-sik resigned amid allegations that he helped a college friend’s son get a job when he was the president of Hana Financial Group in 2013.

“However, my actions at the time may not meet eye-to-eye with the public’s and for the sake of fairness as the head of the FSS, which is in charge of investigating hiring practices in the financial industry, I came to the judgement that stepping away is the responsible action.”

According to the FSS, Choe turned in his resignation to the Blue House the same day.

The FSS said the organization will temporarily be run by first senior deputy governor Yoo Kwang-yeol.

If the resignation is accepted by the Blue House, Choe would become the FSS governor with the shortest term ever. He was appointed last September, which makes it seven months. He made headlines at the time as the first governor to have come from the private sector.

Despite the accusation, Choe has repeatedly denied having been behind the hiring of the son of a college friend. In a statement that was delivered to the FSS employees early Monday, Choe said an independent special probe will be set up to clarify the facts regarding the hiring scandal at Hana Bank.

The FSS has already requested related data from the bank.

“It’s really disappointing that I have been accused of being involved in the Hana Bank hiring scandal,” Choe said.

On Sunday Choe admitted that he received a call from a college friend saying that his son had applied for a job at Hana Bank in 2013. He said he passed on the name of the applicant to an official in the HR department but was not involved in the hiring process.

There were rumors that the applicant didn’t meet the company’s standards but still landed a job.

KEB Hana Bank claimed that while Choe recommended the applicant to HR, he was not personally involved in the hiring process.

Ironically, since taking office Choe has been in charge of investigating unfair hiring practices in the financial industry. The FSS at the end of January turned over investigation results on five commercial banks, including Hana Financial Group and KB Financial Group, who hired children of elite families headed by lawmakers and executives. KEB Hana Bank was accused with the most cases - 13 - followed by KB Kookmin Bank and DGB Daegu Bank with three each.