The specter of centralism

The specter of centralism 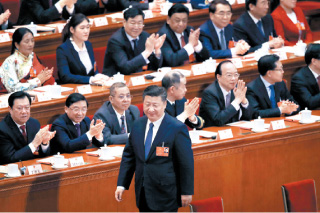 Delegates applaud as Chinese President Xi Jinping walks to his seat after casting his vote for an amendment to China’s constitution that will abolish term limits on the presidency and enable him to rule indefinitely, during a plenary session of the National People’s Congress at the Great Hall of the People in Beijing. [AP/YONHAP]

An amendment that allows Chinese President Xi Jinping to stay in power for life passed the National People’s Congress with 99.8 percent of the vote. Of the 2,964 delegates, only 2 voted against the amendment. There was no polling station for secrecy, and the A4-size ballot was marked and cast without even being folded. The Chinese-style “secret” ballot system undoubtedly contributed to the near-unanimous result.

The long socialist tradition of so-called democratic centralism was also a factor. The theory is that ideological differences are allowed during the decision process, but once a choice has been made no opposition is allowed. Karl Marx and Friedrich Engels defined democratic centralism as a centralized system that needs to be implemented temporarily during a proletariat dictatorship, a stepping stone on the journey to a communist society.

It was Russian revolutionary leader Vladimir Lenin who developed it as an actual organizational theory. In Lenin’s time, the democratic concept of electing leaders through votes was mixed with the centralization principles of hierarchical obedience. In the Stalin era, it went further. Absolute obedience to the party was required, and minor opinions were ignored to keep a unified state direction. Democratic centralism was used as a justification to purge opponents such as the Trotsky faction.

The specter of democratic centralism, where democracy is gone and only centralism remains, is still haunting the Korean Peninsula.