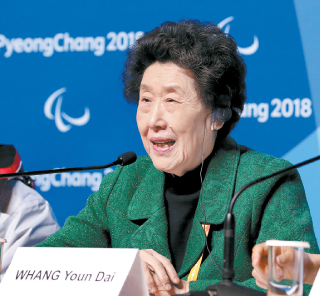 The International Paralympic Committee (IPC) said Hall and Pyy won the Whang Youn Dai Achievement Award, which is named after a Korean doctor who advocated for people with disabilities for more than 50 years.

The award, which was established by IPC at the 1988 Seoul Summer Paralympics, has been given to two athletes - one male and one female - at the end of each Paralympic Games. It is presented to Paralympians who best exemplify the spirit of the Games and the Paralympic values.

Hall was selected as the male winner for the award over two Nordic skiers - Sin Eui-hyun of Korea and Vitaliy Luk’yanenko of Ukraine.

The 30-year-old New Zealander, the gold medalist in the men’s slalom standing event at Vancouver 2010, was born with spina bifida. He began skiing at age six and switched to snowboarding three years later. Hall later switched back to skiing to compete in the Paralympic Winter Games in 2006.

At the PyeongChang Paralympics, he claimed bronze in the men’s super combined standing event on Tuesday.

Pyy took the award from the women’s side over two visually impaired alpine skiers - Yang Jae-rim of Korea and Danelle Umstead of the United States. The 25-year-old sustained a spinal cord injury that resulted in paralysis of her lower body following a car accident in 2010.

Though she began skiing at age two, Pyy entered the world of para Nordic skiing two years after her car accident. Pyy has yet to win a medal at the Paralympics.

The IPC said the Hall and Pyy will receive a pure gold medal, weighing 75 grams, at the closing ceremony of the PyeongChang Winter Paralympics on Sunday.