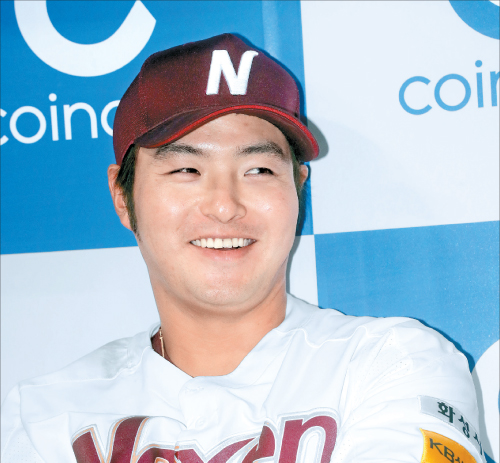 Many critics said first baseman Park Byung-ho was crazy for signing a one-year contract for 1.5 billion won ($ 1.3 million) with the Nexen Heroes when he could have received about 7 billion won over two seasons if he stayed with the Minnesota Twins.

But Park chose a long-term career move over the lure of big money. He hopes to play in more games to increase his value once he becomes a free agent.

During Park’s career in the Korea Baseball Organization, he was the league’s top slugger, leading the league in home runs from 2012 to 2015 while the Heroes played at Mokdong Baseball Stadium in western Seoul.

After five seasons with the Heroes, Park signed a four-year contract with the Twins at $12 million with the possibility of another year. Park failed to live up to the Twins’ high expectations, recording a batting average of 0.191 with 12 home runs, 24 RBIs and 28 runs in 68 games during the 2016 season. Park was then demoted to the minor leagues and wasn’t able to get back up to the majors.

The JoongAng Ilbo, an affiliate of the Korea JoongAng Daily, met with Park at Gocheok Sky Dome in western Seoul last Tuesday.

Q. You returned to the KBO after two seasons. How do you feel?

A. I’ve been waiting for the opening day [March 24] of the KBO league full of excitement. I’m disappointed that I didn’t produce satisfactory results in my past two seasons. I’ll be satisfied once I start playing like I did before I left for the United States, when I played for Nexen.

Now that you’ve returned to Korea for the first time in a while, what changed the most?

The formation of the team, the coaching staff and the players changed completely. The close relationship the Heroes had between the players and the coaching staff still stayed the same, which helped me adjust to the team quicker. But our home stadium is now Gocheok Sky Dome, which is bigger [than Mokdong Baseball Stadium]. There’s nothing I can do but to show [the fans] that I can play well here.

Lee Seung-yuop said that “Park Byung-ho will break my career home run record [467].” How do you feel about that?

I was very thankful that he said that. But Lee Seung-yuop’s record isn’t something I can surpass. I can’t break his record. I just want to follow the path of Lee Seung-yuop. Since his debut, he hit a lot of home runs, but I couldn’t. So I can’t get past him. Even if I play until 40, I can’t guarantee that I’ll be hitting home runs [like Lee]. I don’t care much about the record.

Did your time in the United States help your baseball career?

Now I have a thought in mind that I should focus on the basics. For example, when I hit a ground ball in the last inning, I didn’t run as hard because I didn’t like my hit. But realistically, regardless of the situation, I should try my best in running to first base. These are the kind of basics I want to repeat. Everyone realizes it, but they have a hard time putting it into action.

Honestly, I couldn’t watch the Heroes’ game last season because I was busy taking care of myself. But while I was gone, every single player on the team played well. Infielder Kim Ha-seong kept a great balance on the team in both offense and defense. I heard that 2017 rookie of the year Lee Jung-hoo is a great player.

The club is unorganized due to Lee Chang-suk’s [the owner of the Heroes] imprisonment. What’s your stance on this matter?

The team’s atmosphere is great and the players are trying their best in keeping it that way. The situation [with Lee Chang-suk] didn’t affect me in my decision to return. The only thing I was worried about was my remaining contract with the Twins.

Wasn’t it really difficult to give up the big paycheck that you could have received with the Twins?

When do you want to play baseball until?

I don’t know when I’ll quit, but I want to play for a long time. I have no regrets about my decision to play in the United States.

To other players planning on playing in a foreign league, what would be a word of advice you could give to them?

I learned a lot from the high-paid players in the United States who were focusing heavily on the basics. Before, I tended to be easygoing.

I told the younger players on my team, “Let’s focus more on the basics now.” But the players don’t ask me [about my experience in the majors].