From Bozo to Krusty, rethinking the American clown

From Bozo to Krusty, rethinking the American clown 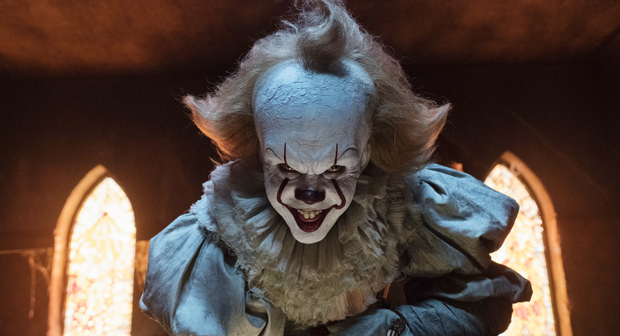 Bill Skarsgard plays the evil clown Pennywise in a scene from the film “It,” based on the book by Stephen King. [AP/YOPNHAP]

NEW YORK - His nose was round and bright red, his face as white as a sheet. His mouth was surrounded by an exaggerated smear of red makeup and his arched eyebrows hung ridiculously high on his forehead.

Such was the daily uniform of Bozo the Clown, who entertained kids for decades when TV was in its infancy. It’s also a uniform that for many now seems grotesque and sinister.

The death of longtime Bozo performer Frank Avruch this week triggered both feelings _ warm memories from some and a shiver of fear from others who associate clowns more with the film “It.”

Which begs the question: When exactly did clowns go from birthday-party goofy to downright sinister? Well, hold onto your really big shoes _ experts are divided.

David Carlyon, author, playwright and a former clown with Ringling Bros. and Barnum & Bailey Circus in the 1970s, argues that the fear of clowns _ known officially as coulrophobia _ is a relatively new phenomenon, born from the counter-culture 1960s and emerging as a popular force in the 1980s.

Carlyon said clowns were considered sweet and funny for two centuries until an inevitable backlash that included Stephen King’s hit novel “It,” the film “Poltergeist,” Heath Ledger’s white-faced maniac Joker, the misanthrope Krusty the Clown from “The Simpsons,” the shock band Insane Clown Posse and Homey D. Clown from “In Living Color.”

“Anything that gets that much glorification and is sentimentalized within an inch of its life invites someone to snark at it,” said Carlyon, who recently discovered the cover of a National Lampoon from 1979 with a girl cowering in fear of a malevolent clown.

Not so fast, argues Benjamin Radford, an author and editor at Skeptical Inquirer magazine who literally wrote the book on the subject, 2016’s “Bad Clowns.” Not to throw a pie in anyone’s face, but he argues that evil clowns have always been among us.

“It’s a mistake to ask when clowns turned bad because historically they were never really good. They’ve always had this deeply ambiguous character,” he said.

Radford traces bad clowns all the way to ancient Greece and connects them to court jesters and the Harlequin figure. He notes that Punch, an evil puppet who frequently smacks his partner Judy with a stick, made his first appearance in London in the 1500s. “You have this mass-murdering, baby-killing clown that’s beloved by Britons everywhere of all ages,” he said.

Clowns in America had their roots in circuses and they were at first meant to amuse adults, but clowning history took a detour in the 1950s and `60s when the squeaky-clean Bozo and Ronald McDonald became the “quintessentially American default clowns” for kids, Radford said.

The more sinister clown waited patiently for his day to shine. “Stephen King didn’t invent the evil clown. That was long before his time. But what he did was turn the coin over, if you will,” Radford said.

Even if there’s debate on the issue, Radford paid homage to Avruch, the first nationally syndicated incarnation of the iconic Bozo.

“The fact is that we need both bad and good clowns because without the good clowns like Bozo, there’s no contrast, there’s no tension to make the evil or scary clowns entertaining or interesting,” Radford said.