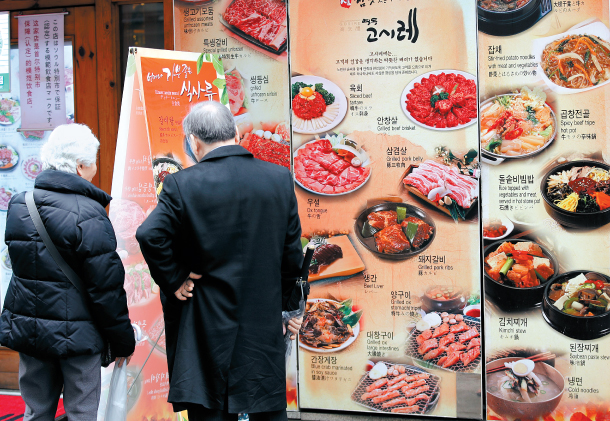 Oftentimes, not eating meat is a difficult option in a meat loving country, where almost everything from simple soups to items on the vegetarian menu at a bistro contain at least a small amount of meat or animal-derived ingredient.

If you order a vegetarian gimbap (seaweed rolled rice) at a regular diner, for example, it may still contain a piece of ham, despite its name. Making things worse for vegans, fried eggs and pieces of crab are also packed inside the roll, which is usually served with broth made using meat.

This increasingly meat-based food culture makes life very difficult for vegetarians in Korea. Unlike the United States, Canada or Singapore, with vegan restaurants and vegetarian retail shops abound, only a few restaurants serve vegan food in Korea. It is also very uncommon to see vegan-friendly sections in local retailers, even at major discount chains like Emart and Lotte Mart.

“In Korea, people from restaurants don’t like it when their customers ask for somthing to be taken out from their food,” said American vegan AJ Garcia, who lives in Korea and runs the vegan burger restaurant Huggers in Itaewon, central Seoul. “I once went to a diner and asked for my dish to be cooked in water since broth has meat in it. [For a vegan], you can taste it. But despite what I had asked, the cook served the dish in broth anyway, saying, ‘I just put a little bit.’”

Garcia, who is also the executive director of Coexistence of Animal Rights on Earth’s (CARE) American branch, added, “It’s a lot different in the United States. You can go to any supermarket and there’s a vegan section. You can get vegan everything from a hamburger to an ice cream.”

Luckily for vegetarians in Korea, the number of vegan restaurants and bakeries in the country has gradually increased over the past few years following media attention given to vegan diets.

At left is a vegan burger made with soy meat from YummyYomil in Mapo District, western Seoul. A matcha ice cream latte, center, a vegan mugwort pound cake and a pumpkin scone, right, made without any dairy products, is sold at the vegan bakery Cafe Honesta in Hongdae, western Seoul. [JIN MIN-JI]

However, they are mostly concentrated around hip areas like Itaewon and Hongdae in central and western Seoul, forcing vegans to venture out to those areas in order to dine out.

Another problem is that many of these vegan restaurants and bakeries have short operating hours. Huggers, for example, is only open on Fridays and weekends, and vegan bakery Ilpleutsuparis in Hongdae is also only open three days a week. When the shop is in operation, the bakery is open from 1 p.m. to 7 p.m.

“When I first started to watch my diet four years ago, I realized there is almost nothing I could eat outside. When you meet friends, you usually go out for a meal, but that was not possible for me since I had shifted my diet,” said raw food instructor Kim Yeo-un, who started off with a raw diet and gradually shifted to being a vegan. “At first, I invited my friends over and prepared raw and vegan dishes for them. But I realized that it wasn’t sustainable, as my friends wanted to eat out, and the type of food they craved was not right for me.”

“I can’t deny that changing my diet cost me some friends because we don’t meet up as often as we used to,” admitted Kim, adding that, “you feel lonely when you become a vegan.”

That loneliness drove her to launch a monthly gathering with fellow vegans to share their recipes and stories of vegan life in Korea while enjoying delectable treats prepared by Kim.

Keum Suh-yeong, who currently works in Singapore, shared a similar experience. “Being a vegan in Korea is extremely tough,” she said. She went on to explain that her life has become a lot more comfortable in Singapore.

“In Korea, I couldn’t go completely vegan. Although I tried my best to exclude all the animal products from what I consumed, most of the restaurants in Korea serve dishes revolving around meat. Even side dishes are cooked based on meat broth. But in Singapore, most restaurants offer vegan dishes, and even better is that there are so many salad shops here.”

In Korea, salads are usually considered a healthy diet food consumed by those looking to shed weight. Therefore, salads, which most people buy at cafes, usually contain pieces of chicken breast, slices of cheese or a boiled egg to add protein to the meal. Even Starbucks, which is known for customizing drinks for its customers, provides limited food options for vegans, with almost all of its salads and sandwiches containing some kind of meat, such as chicken, bacon or turkey. Recognizing the potential economic value in vegan diet, the coffee chain started selling vegan cakes nationwide last week. But the ingredients haven’t been able to meet the expectations of many health-conscious vegans.

Outside of the limited food options, the negative social perception of those with dietary restrictions is another factor that hinders vegans from having an ordinary social life.

“Communal culture in Korea puts a lot of pressure on people to follow trends,” said Garcia. “Korea has a social culture of eating and doing everything together. So if you do anything out of what is considered normal, it makes your life very hard… Feeling ostracized in this country is very big.”

Many vegans in Korea are often forced to make up lies just to get through various social gatherings.

According to the raw food instructor Kim, people from her monthly vegan gathering are often forced to come up with some smart moves to prevent awkward situations while eating out with others, especially with colleagues.

“Some of them told me that they either lie that they’re taking oriental medicine as an excuse to avoid eating meat or continuously flip over the meat being grilled so that nobody notices that he or she is not eating it,” said Kim.

“This happens because vegans are often regarded as people who need to be attended to, and both sides don’t want that to happen every time they eat together.”

Regarding the social pressure, Prof. Chun Sang-chin, who teaches in the department of sociology at Sogang University, said, “Korean society has a strong social pressure to be in sync with others rather than tolerating an individual’s choices. This trend is not only seen among people of older generations, but also among young people in their 20s and 30s.”

Despite social pressure, the lack of a vegan options in school meals across Korea has played a major role in stigmatizing vegan diets, according to the head of the Vegetarian Nutrition Research Institute, Dr. Lee Gwang-jo, who has a Ph.D. in food and nutrition from Seoul National University.

“Back in the ’70s and ’80s, mainstream studies revolved around a diet that included meat. Those who learned from those studies in the West back then have now settled as professors in Korea. The students who studied under those professors have become nutritionists at schools, planning diets revolving around meat,” said Lee.

Since these school meals provide students with access to meat from a young age, they naturally become “addicted” to the taste of meat, explained Lee.

“That’s why schools need to offer vegan-based meals to students from as early as daycare, so they can become used to the taste,” he said. Uniformly providing meals centered around meat when there’s, in fact, another diet option is “abuse in a way,” according to Lee.

Generally, there’s a perception that following a vegan diet is more expensive than a more conventional diet. Food served at vegan restaurants and bakeries are often priced slightly higher than their substitutes sold at other diners and bakeries around the country.

Price-conscious customers can head to a local franchise bakery like Paris Baguette where they can purchase a cake that is four times bigger than the palm-sized dessert for nearly the same price. But according to Lee, there is a solution.