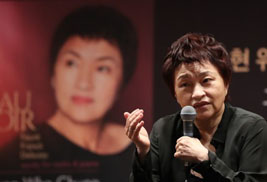 Renowned violinist Chung Kyung-wha released a new album titled “Beau Soir” on Tuesday, her 33rd album in her 64-year career. The album contains 12 tracks by three French composers including Faure, Franck and Debussy. Chung recorded the album together with pianist Kevin Kenner, whom she calls a “partner” and the album their “collaboration.”

For the Korean version of the release, there’s a special bonus track, which is Elgar’s “Salut d’amour” - a piece that has been loved by many of Chung’s Korean fans.

Chung, who celebrated her 70th birthday on Monday, began playing the violin when she was 6 years old. Although she has recorded 33 albums so far, Chung said that she didn’t realize she had recorded that many and that she had always recorded every single album as if it was her last.

“Recording an album is always so difficult,” she said during a press conference for her new release in central Seoul on Tuesday. “I put all my energy into it that I always think to myself that it would be my last.”

Chung grabbed international attention in the classical world in 1970, after making a debut performance in London, playing the Tchaikovsky Concerto with the London Symphony Orchestra.

Chung and Kenner will hold three concerts together, starting with a concert on April 2 at the Tongyeong Concert Hall in South Gyeongsang for the annual Tongyeong International Music Festival, followed by a recital in Busan on April 3, and then in Seoul’s Lotte Concert Hall on June 3.