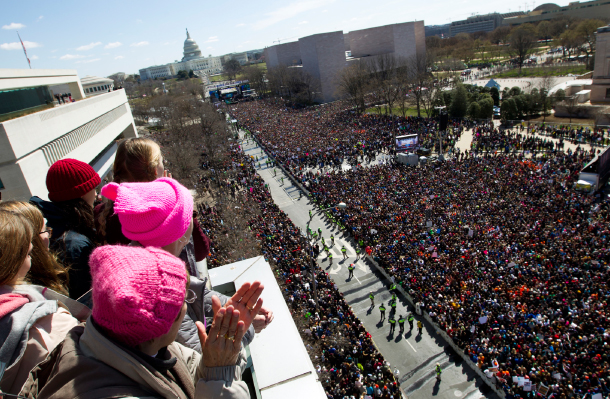 People on the balcony at the Newseum join with protesters on Pennsylvania Avenue as they look toward the stage near the Capitol during the March for Our Lives rally in support of gun control in Washington on Saturday. [AP/YONHAP]

The cries against gun violence on Saturday in Washington reminded me of the massive protests against Park Geun-hye in Gwanghwamun Square last year.

The March for Our Lives was filled with young parents pushing strollers, students from around the country and celebrities supporting their voices. They hugged one another and shared tears and smiles just as Koreans did in Gwanghwamun more than a year ago.

The crowds demanding gun reform filled the 2.5-kilometer (1.55-mile) stretch of Pennsylvania Avenue from the U.S. Capitol to the White House. Restaurants offered free fruits and drinks. A dozen stores, including Shake Shack, offered 50 percent discounts. I’ve never seen this in the United States before.

Another moving moment was when a 9-year-old granddaughter of Martin Luther King Jr. stood right where the civil rights leader gave his famous “I Have a Dream” speech and said, “My grandfather had a dream that his four little children would not be judged by the color of their skin, but by the content of their character. I have a dream that enough is enough and that this should be a gun-free world, period.”

What set the recent march apart was the lack of a target or mutual enemy. Protesters called for gun control and systemic changes. No one attacked President Trump, who was not in Washington but playing golf in Florida. They did not march to the White House. The focus was to change society, not people.

Countries with different cultures and histories have different forms of protest. The power of the United States seems to be grounded in social health. It is not just protests that are different. The Me Too movement began in America, but it is hard to see shaming or public judgment of the accused. It is up to the law to punish their crimes.

The focus is on improving society and the future. The media did not create a witch hunt. A culture of ending controversies with suicide is not common. Unlike in Korea, when dealing with political issues, investigative authorities do not conveniently leak information, even after an administration changes. Americans respect lively discussion, diverse arguments, fair legal processes, trials and necessary legislation.

What do the detention of former President Lee Myung-bak on corruption charges and the suicide of Me Too-scarred actor Jo Min-ki mean to Koreans? It is only just that they were punished according to their crimes. That is the basic premise. But perhaps some people take extremes for granted.

We often use such combative phrases as “debates to the end” and “strikes till the end.” Some politicians in the opposition make extreme remarks like “I will kill myself at Dongdaegu Station if my charges prove true” or “I will burn my fingers.” And both the speakers and listeners don’t find anything wrong with such remarks. Korea has become an odd society.

In a society that goes to extremes, the attacks often target people. It’s like trying to remove bad fish instead of changing the water. Even if fresh fish are introduced, they, too, soon go bad. Then the fish are blamed again and removed.

Not just the powerful but also the people have gotten used to political retaliation and revenge. The answer to the fundamental question of whether to change society or the people lies in us.

The author is the Washington bureau chief of the JoongAng Ilbo.