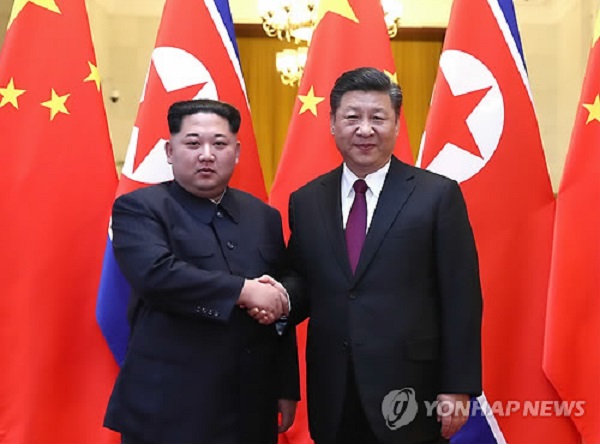 North Korean leader Kim Jong-un, left, secretly visited China from Sunday to Wednesday to discuss issues pertaining to the Korean Peninsula and Pyongyang-Beijing relations with Chinese President Xi Jinping, right, at the Great Hall of the People in Beijing. [XINHUA/YONHAP]

It was the young leader’s first known trip outside North Korea since he took power in 2011 and first meeting with another head of state.

Rumors spread quickly Tuesday that either he or another high-level official from Pyongyang was in Beijing for talks with Xi. Photos uploaded online showed a vintage, dark-green North Korean train similar to the one used by Kim’s father, Kim Jong-il, arriving in the Chinese capital.

According to the North’s state-run Korean Central News Agency on Wednesday, Kim and Xi shared “crucial opinions” on improving Beijing-Pyongyang relations, “issues pertaining to the management of Korean Peninsular affairs,” as well as other “important matters.”

On denuclearization, Kim was quoted by China’s state-run Xinhua News Agency as saying that it was his “consistent stand to be committed to denuclearization on the peninsula” in accordance with the will of his father, Kim Jong-il, and his grandfather, Kim Il Sung, who founded North Korea.

Kim said he was willing to talk with the United States and hold a summit with President Donald Trump, adding that the denuclearization issue can be resolved if Seoul and Washington “respond to our efforts with goodwill, create an atmosphere of peace and stability while taking progressive and synchronous measures for the realization of peace.”

Kim’s visit to Beijing comes weeks before he is expected to hold his first summit with South Korean President Moon Jae-in in late April, the third meeting of its kind between two Korean leaders, and a first-ever summit with the United States by the end of May, though the dates for both meetings have yet to be determined.

South Korean analysts believe Xi’s invitation to Kim was a reflection of China’s anxiety that it was being bypassed in the recent flurry of diplomatic overtures between Seoul, Pyongyang and Washington. China may perceive its grip over Northeast Asia eroding, and North Korea will need Beijing’s backing to ease sanctions against the regime.

China is known to be North Korea’s strongest economic and military ally, but their relationship frayed after Beijing complied with global pressure to restrict trade with North Korea last year.