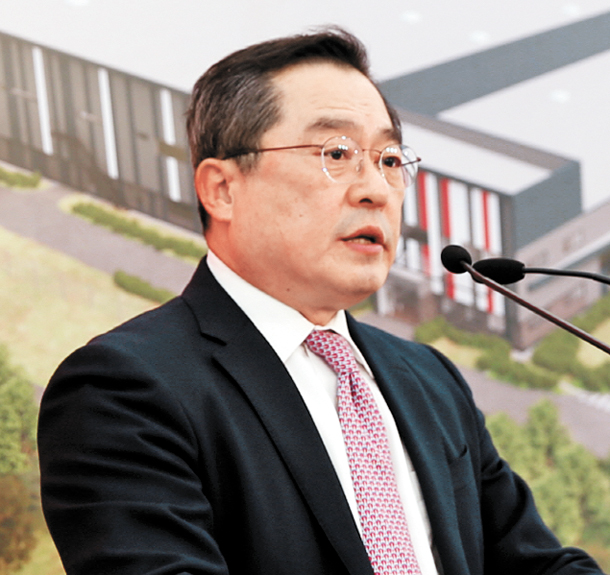 Christopher Koo, chairman of LS Group, gives a speech on March 14 at the groundbreaking of its subsidiary SPSX’s plant in Zrenjanin, Serbia. [LS GROUP]

“We thank you very much for the support of LS Group in Serbia and we hope this opportunity will allow other companies in Korea to offer investment in Serbia. Furthermore, Serbia will offer full support to foster the best environment for offshore companies in the country,” said Vucic in his speech.

“SPSX continued with its good performance. As an additional development strategy, we were able to construct a production base in the rising Eastern European market. Serbia, especially, has a great concentration of economic activity based on its outstanding human resources and political stability,” Koo said. “We expect the partnership with LS Group will create a great opportunity for Serbia to develop as a production base for the winding wire industry in Eastern Europe.”

As part of the plan, LS Cable & System established a sales corporation in France and a production facility for electric car components in Poland. LSIS built a solar photovoltaic power station for energy storage in Japan.

SPSX is the No. 1 winding wire company by sales in the world and No. 4 communication cable manufacturer in North America. It has branches in 10 countries on three continents, including the United States, China, Germany and Italy. Its headquarters are in Atlanta, Georgia. Last year, SPSX had sales of $2 billion and pre-tax profits of $58.12 million.

SPSX has production facilities in Germany and Italy and has 20 percent of the European market share for winding wire. With the recent developments in the automobile market as well as the recovery of the European economy, sales of winding wire for electric car motors are expected to increase.

Serbia has the goal of joining the European Union in 2020, having democratized in 2000. The country prioritizes economic policies that can expand foreign and public sector investment. Serbia has excellent access to the Eastern European market, including the nearby countries of the Czech Republic, Hungary and Romania.