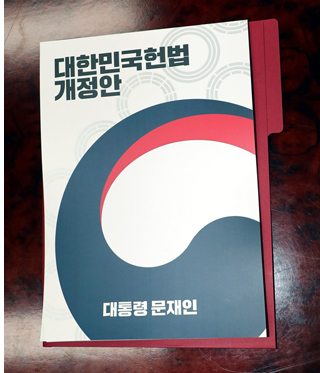 The United States, a so-called textbook democracy, is no exception to partisan fights. While in office, President Barack Obama criticized his predecessor, George W. Bush, for the wars in Iraq and Afghanistan and withdrew troops.

Now, President Donald Trump is working to repeal the Affordable Care Act, popularly known as Obamacare, and with the firing of H.R. McMaster, there is talk in the U.S. media of a massive purge of Obama associates coming soon.

Yet there is a line that won’t be crossed. During the televised presidential debates, Trump warned his Democratic opponent, Hillary Clinton, that she would end up in jail for her email scandal if he were elected president.

But once in office, Trump told his supporters to let go of the past when they shouted “Lock her up” during a celebration of his victory. It was a threat that was never going to be realized.

Korea, however, is different. Two former presidents are, quite literally, locked up. Of course, the charges against them are different from Clinton’s, and the reason is the mighty power of appointments that Korean presidents have.

In Korea, the president does not actually have much room to make policies. Although he was criticized for running his government like a king, President Lee Myung-bak was never able to build a grand canal on the Korean Peninsula as promised during his campaign.

His successor, Park Geun-hye, was unable to get her prime ministers past confirmation. In a National Assembly dominated by opposition, the head of the main opposition party is the de facto decision maker.

But appointments of top government posts are a different matter. The president can name more than 2,000 positions. There is no mechanism to check the president for appointments — and dismissals — in the National Intelligence Service, prosecution, National Tax Service and other powerful organs. Although they undergo confirmation processes in the legislature, the sessions are nonbinding.

The appointment of Moon Jae-in loyalists to key posts is a good example of the current administration’s excessive power. Some loyalists have earned ambassador posts even when they don’t have the proper language skills, while ambassadors to major countries have been mercilessly recalled in the middle of their terms if they have been deemed friendly to previous administrations. The judiciary and publicly owned broadcasters also are no exception.

The United States, which invented the presidential system, is different. The founding fathers drafted the Constitution so that the president and Congress had to share appointment power. The president exercises the right to nominate, while the Senate must approve. There are about 1,200 top positions, and confirmation hearings take place for 600. Heads of powerful government agencies go through confirmation processes.

And they are not just a formality. One out of four Supreme Court justice nominees is either withdrawn or rejected. Clinton had to answer 1,562 questions for her confirmation hearing to become secretary of state.

In Korea, about 60 posts require hearings, and most do not even require a vote of approval.

Yet President Moon’s constitutional reform bill still fails to offer a proper mechanism to check the president’s power. Opposition parties are promoting a system in which the president will be in charge of foreign affairs while a prime minister is in charge of domestic affairs, but that is destined to turn into a turf war. We can easily imagine inefficiency with a President Moon and “Prime Minister” Hong Joon-pyo from the opposition Liberty Korea Party.

Becoming president is the ultimate goal of all politicians, but once one achieves the goal, the job is always too heavy. One former president lamented that he could not put up with the job and said the Blue House felt like a prison. It’s because presidents fail to share power with the National Assembly. Sharing power should be the starting point and end goal of constitutional reform.

Moon promised to share power in his inauguration speech, but his reform bill is quite unconvincing because he does not follow through with his promise. He won’t be able to reform the criminal justice system in which prosecutors and police act loyal to incumbent presidents while they are in office but attack them after their terms end. At some point, this administration, too, will lose its power.


The author is an editorial writer for the JoongAng Ilbo.