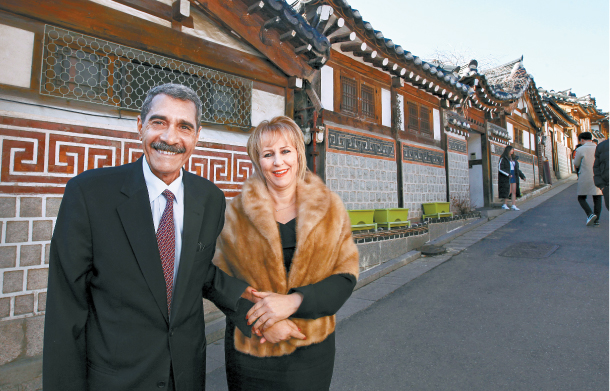 Algerian Ambassador Mohammed El Amine Derragui and his wife Chafika Derragui at the Bukchon Hanok Village in central Seoul, located on the east side of Gyeongbok Palace, on Feb. 27. The narrow street that descends down a hill, with houses on either side of the street, is the perfect reminder of home, said the couple, who introduced the Casbah, a coastal pocket of the capital city of Algeria with winding narrow streets and traditional houses. [PARK SANG-MOON]

Cascading down a hill against the deep blue of the Mediterranean Sea, the image of the old citadel city of Algiers is a call from home for the Algerian Ambassador Mohammed El Amine Derragui and his wife Chafika Derragui.

In the top envoy’s fifth posting in his diplomatic career, they have taken the image with them, literally, to their new home in Seoul.

“Most of this artist’s paintings are about the Casbah,” said Ambassador Derragui, pointing at an illustration of the Maghreb city painted on ceramic tiles by artist Mohamed Racim at his residence in central Seoul. “He paints scenes of Algerians making tea in their homes or dancing and making merry music as they have done from the old times.”

The Casbah, the traditional Islamic city located on the west side of the bay of Algiers, holds the remains of the citadel and Ottoman-style architecture that has been standing for centuries. It was listed as a Unesco World Heritage site in 1992 and the Algerian government has taken up the task of preserving the old city.
“It is to conserve the soul of that part of the city,” said the top envoy.

In their third year as Seoulites, the ambassador couple noticed a part of the city close to home that reminds them of the Casbah. Sometimes they would stop by in the mornings before work or make a trip after work to watch the sun set over the mountains on the west side.

“We make regular trips to the Bukchon Hanok Village,” said Chafika Derragui. “The first time there, I was surprised to find that one of the main roads in the village is very much like the signature down-hill roads of the Casbah, with the traditional doors on each side.”

Sipping mint tea and enjoying the dates from Algerian palms, the couple delved into the history behind the winding roads of the Casbah that protected and housed different groups of people over the ages and how they may be best preserved and developed, perhaps like the way Seoul kept its hanok (traditional Korean house) villages. The following is an excerpt of the interview.

Left: Algerian Ambassador Mohammed El Amine Derragui and his wife Chafika Derragui at their residence in central Seoul on Feb. 27. Behind them are a model of a saddle and a painting of Emir Abdelkader, leader of the Algerian independence movement.

Q. What is the significance of the Casbah to Algerians?

A. Mohammed El Amine Derragui: Casbah today is less than 10 percent of what was the whole city before. As you know, Algeria was part of the Ottoman Empire and then came the French occupation at the beginning of the 19th century. During the liberation war, we had two kinds of war — we had freedom fighters fighting in the bushes and we had in the cities what we called the Fidayeen, it’s a kind of urban guerilla. The Casbah was famous because it was there that all the organization and all the leaders were hiding. It was very difficult for the French to catch or locate them, for they had to know the city very well, because you can go from one house to another without getting out to the narrow streets in the Casbah.

Of course, a lot of damage was done during the war. That is why we have less than 10 percent of the city left today. But still, you see the history of Algeria in the walls of the old citadel — you will find traces of the genuine North African architecture and some architecture of the Ottoman Empire. That’s why we call the architecture in Casbah a mix of Moresque and Ottoman design.


Do you find any similarities between hanok and houses in the Casbah?

Chafika Derragui: When you enter a traditional hanok, you see that there is an open space in the middle, kind of like a yard. The traditional houses in the Casbah also have this open space where you can see the sky, where family members would gather for tea in the evenings.

Mohammed El Amine Derragui: Especially during the month of Ramadan, there is a lively cultural life in the evenings. After enjoying a meal together, the family would get together and have music and sing and dance. During this time, there is a special gathering around the bokala.

Chafika Derragui: On the 27th day of Ramadan, families and friends could gather up on the terrace of the house to do the bokala. In the past, there would be an elderly woman who can read futures. So the women gathered around and would put their rings or jewels inside a jar, and the lady would withdraw a ring or jewel and read the future for the owner of the jewel.

Another similarity I drew between hanok and the houses of Casbah is that there are spaces within homes in Casbah designated just for the ladies and just for men, especially when guests are around. I heard that it was similar in hanok homes, where ladies would gather at a part of the house called anchae and men with their guests at sarangchae. A difference, on the other hand, is that homes in the Casbah are usually two stories high and they have terraces, unlike the signature roof structure of hanok homes in Korea.


The homes in the Casbah have been around for centuries. Are there any difficulties in preserving the structures?

Mohammed El Amine Derragui: After the independence movement, the Algerian government and civil societies have been very keen to restore the Casbah. The government has taken charge of renovating public places, such as castles, and the whole process is to take a while because we want to restore the structures of the Casbah the way they were, using the same materials — the same stones and wood.

I am aware that the Seoul city government partially finances renovation work on hanok houses and that it requires voluntary registration by residents. The process is a bit more complex in Algiers. Around 90 percent of the houses in Casbah are privately owned and usually residents do not have enough means to restore the houses by themselves. The laws do not allow them to destroy and rebuild as they wish in the area. But some families who had the means renovated their traditional homes, preserving the architecture. Some homes have been renovated into traditional restaurants.

Additionally, many of these residents are third- or fourth-generation inheritors of the houses, and the law requires that all relevant inheritors sign an agreement to renovate a house in Casbah. Because the decision has to be made collectively, that slows down the process sometimes.

Mohammed El Amine Derragui: The best time is always spring. But even if you visit during the summer, the streets are narrow among buildings, creating enough shadows to keep it cool. There is a sample house that is open for tourists in the Casbah, and there are two museums inside the house.

Chafika Derragui: Some locals will be happy to invite you over for tea and you will be able to enjoy some tea brewed and made the way it has been for ages in Algeria. We usually use green tea and fresh mint and we tend to take sugar in our tea. Tourists may even get to see the way bread and cakes are baked using traditional recipes and ovens.

Mohammed El Amine Derragui: When you navigate through the Casbah you will notice that the area is organized in such a way that each street used to specialize in one kind of trade. One street would have specialized in textile, another in leather and another in arts and crafts or copperware. The city is largely two-part: the lower Casbah goes down to the port and the upper Casbah is on the hills. So if you ever get lost in the narrow streets, just remember to make your way down and you will be able to begin again near the sea.

There are around 20 Korean companies with a physical presence in Algeria, including Hyundai E&C, Daewoo E&C, Samsung C&T and Hanwha E&C. In 2016, Hyundai Motors and Tahkout Group signed an agreement to manufacture vehicles in Algeria. Korea exports vehicles and electronic goods to Algeria, while it imports from the country natural gas and LPG.

On March 10, at an event dedicated to International Women’s Day, Chafika Derragui, wife of the ambassador, emphasized the role women played in the Algerian Revolution, adding that they continue to play an important role in society today: More than 50 percent of university staff, 60 percent of medical practitioners and over 30 percent of judges in Algeria are women, she said.

Ambassador Mohammed El Amine Derragui began his tenure in Seoul in April 2015. He was previously ambassador to Iran and
Uganda, and his previous postings include Yugoslavia and India. He is married to Chafika Derragui, and they have two children.