Chung Hyeon made Korean tennis history on Monday, beating his own record to become the highest ranking Korean tennis player ever at No. 19 in the Association of Tennis Professionals world ranking. 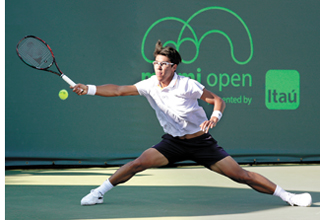 Chung Hyeon returns the ball against Matthew Ebden of Australia during the Miami Open in Key Biscayne, Florida on March 23. With another quarterfinal finish, Chung is now the highest ranked Korean of all time. [AP/YONHAP]

Chung moved up four spots from two weeks ago, when he was No. 23. He became the second youngest male Asian player, at age 21 years and 11 months, ever to break into the top-20. As Kei Nishikori of Japan is ranked 39th, Chung is now the highest ranked active Asian player.

But Nishikori still holds the record for the highest ranking ever reached by an Asian male tennis player, reaching the lofty heights of fourth in 2015. Paradorn Srichaphan of Thailand has previously reached ninth and Vijay Amritraj of India has reached 16th in the world ranking. Both Srichaphan and Amritraj are retired.

“I am so happy for this achievement and hope for more success like this very soon,” Chung posted on Instagram. “Thank you to my team and to my fans always for your support!”

Chung gained wide popularity when he caught the tennis world by surprise at the Australian Open, where he defeated Novak Djokovic of Serbia 3-0 in the round of 16 and went on to beat Tennys Sandgren of the United States in the quarterfinal before falling to world No. 1 Roger Federer of Switzerland.

The Korean star started playing tennis at the age of 6 to improve his eyesight. His mother reportedly took him to the hospital because he was always frowning and found that he had astigmatism. An optician recommended that Chung focus on the color green; his family felt tennis was the best option.

After a few seasons quietly working his way up the world ranking, Chung has exploded onto the international tennis scene this season, reaching the quarterfinals in six consecutive tournaments, starting with the ASB Classic in New Zealand in January.

Chung started the year as the world No. 62 in January, moving down 43 places in just three months.

Most recently, Chung lost to John Isner of the United States in the quarterfinals of the Miami Open in Florida on March 28.

Chung will next compete at the ATP Tour’s Barcelona Open, starting on April 23.