Gov’t plan will give artists a cut of resale price

Gov’t plan will give artists a cut of resale price

Korean artists will soon be entitled to a cut of their work’s resale price, part of a sweeping set of new policies announced by the Culture Ministry on Monday.

The policies, which Ministry of Culture, Sports and Tourism officials announced in the government complex in central Seoul, also include the introduction of standardized contracts between artists and museums, galleries or other institutions. They also require that payments be made to all artists whose work is included in government-sponsored art projects.

"Whereas other developed countries' art markets represent 0.1 percent of gross domestic product on average, Korea’s art market represents only 0.02 percent of its GDP now," the ministry said in a press release. “Considering this and the global interest in Korean art such as the recent international boom of dansaekhwa [Korean monochrome paintings], the Korean art market has high growth potential."

In a move to improve conditions for artists and help boost the market, the ministry presented 44 plans. Among them is the introduction of an artist’s resale right, which local artists have demanded for a long time. 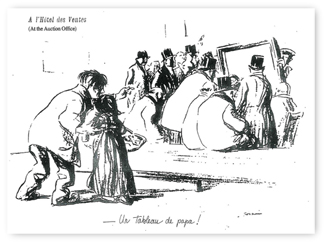 A satirical painting by Jean Louis Forain depicts the poverty-stricken descendants of a famous artist. The government on Monday unveiled a plan to introduce an artists' resale right to provide artists with additional income. [SEOUL AUCTION]

The artist’s resale right has its origins in mid-19th century France. The public began to notice how the works of artists who died in extreme poverty were often sold for wildly expensive prices, benefitting only the owners of the paintings. The suffering of prominent artists became a hot issue, and a 19th-century satirical painting even depicted two children in rags shouting "Papa’s painting!” at a work being auctioned for 100,000 francs.

The Culture Ministry said it would begin preparing the legal basis for the artist’s resale right next year, and use the European Union’s law as an example. In EU member countries, 0.25 to 4 percent of a piece of art’s resale price is allotted to the artist, his or her family or the foundation that holds the copyright to the piece.

The artist’s right is maintained until copyright expires, which is typically 70 years after an artist’s death. Korea’s new regulation will take effect in 2022, after a three-year delay, the Culture Ministry said.

"The regulation has a good intention, but it could have a negative effect in the short term by causing the price of artwork to rise, reducing demand from collectors," said So Jin-su, an art market expert and professor of economics at Kangnam University.