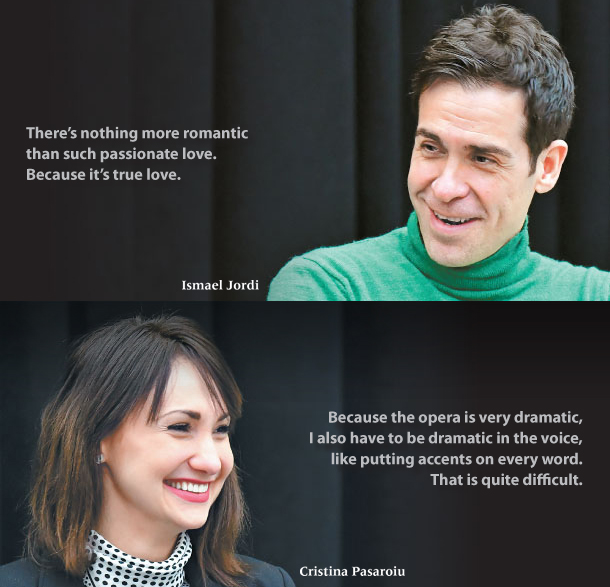 French composer Jules Massenet’s “Manon” has been one of Europe’s most popular operas since its premiere in 1884. But in Korea, it has only been performed once - 29 years ago.

A local production of the opera has never been attempted here, perhaps due to the vocal and acting demands required to play Manon, the female protagonist. Because “Manon” is an opera comique - referring to a genre of French opera that is more like music theater, a relatively new genre in the performing arts that combines contemporary music and theater in a way that is distinct from traditional opera - it requires the characters to be played by someone who can sing and act at a high level. Moreover, a company needs to have a large budget to put on the production as it is a grand opera that requires a large canvas, huge sets and costumes that are full of glamor. In that sense, the Korea National Opera says it is now ready to put on this popular French opera, selecting “Manon” as its first opera of the year.

Based on the Abbe Prevost’s famed 1731 novel, the story of “Manon” revolves around a young girl, who finds herself stuck between true love and the appeal of the life of luxury.

It has all the cliches of an opera. Des Grieux, the male protagonist, falls in love with Manon at first sight. They instantly fall for each other and decide to be together. But soon, Manon craves luxury, betrays her lover and goes off with another man (de Bretigny) to enjoy his wealth. When she hears that des Grieux has entered the seminary, she goes searching for him and seduces him to be with her again. Des Grieux once again abandons everything for Manon and leaves with her. And like in most operas, Manon dies in the end.

To make sure the audience doesn’t lose interest in the cliche-ridden story, it is critical to cast talented singers who can not only sing beautifully in French, but also act well and portray all of the complex emotions of the characters they are playing.

The Korea National Opera and Vincent Boussard, who directed the production, picked four singers - sopranos Cristina Pasaroiu and Anna Sohn and tenors Ismael Jordi and Oliver Kook - who will alternate the roles of Manon and des Grieux. Sebastian Lang-Lessing will conduct the Korean Symphony Orchestra. 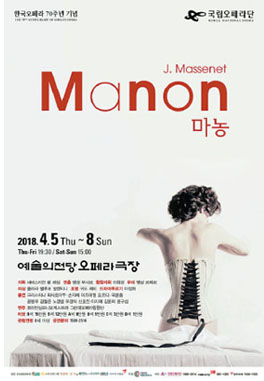 “I wanted to build bridges between different periods in the opera, from the early 18th century to the late 19th century, and as a stage director, to this very day,” said Boussard during a press conference held last week at the Seoul Arts Center, southern Seoul, for the upcoming production of “Manon.”

“What is amazing is that the composer had already done that in the music,” he added, explaining that the Baroque music stops in Act three, shifting to more passionate music.

“What I need to do is bring the story out so that Manon and des Grieux are really like a young man and woman that people can meet on the streets today.”

That doesn’t mean that the upcoming production of “Manon” is set in the modern day.

“What I mean is allowing the audience members of today to sympathize with this opera, even though it is the story from the 18th or the 19th century,” Boussard added.

That is why the director stresses the importance of “natural acting” to his “singers slash actors.”

To hear more about the upcoming opera, the Korea JoongAng Daily recently interviewed Cristina Pasaroiu and Ismael Jordi, who will perform in two of the four performances set to be staged beginning Thursday at the Seoul Arts Center.

Pasaroiu is a Romanian soprano who has played leading roles in many operas including Violetta in “La Traviata,” Musetta in “La Boheme,” Desdemona in Verdi’s “Otello,” as well as Manon, among many others.

Spanish tenor Jordi has sung in opera houses around Europe and made his Royal Opera debut in 2014. He also has a wide repertory including, Duke of Mantua in “Rigoletto,” Alfredo Germont and Romeo in “Romeo et Juliette,” and des Grieux in “Manon.” The following are edited excerpts from the interview.

Q. Can you each explain of your characters?

A. Pasaroiu: For me, “Manon” is not an opera but music theater. Theater comes [before] singing. With that in mind, Manon is a very complex character.

I sing five arias as well as a duet and an ensemble. It’s a huge piece which requires a very strong physique and mental and psychological condition and concentration. The psychology of Manon changes all the time during this five act opera. It changes every second, so I have to make sure I show her different colors during the performance. Describing the 360 degrees of her ever-changing personality isn’t that easy, so I have to concentrate very hard.

It is also vocally very challenging and requires good techniques. Because the opera is very dramatic, I also have to be dramatic in the voice, like putting accents on every word. That is quite difficult.

Because this opera is an opera comique, singers have to be very good actors. You should be able to show the audience the change of emotions and express every feeling. “Manon” needs a soprano who is more than a good singer.

What I also wanted to focus on for this character is being very true. Manon is only 16 so I have to be 16 on stage. Every move, every gesture and every word I say has to be from a 16-year-old. People have to believe me that I am 16 years old and that I hesitate in my mind between power, money and real love as a teenager. To do that, it was very important for me to put away the old structures of the opera, the stereotypical hand gestures, the way of singing and all the traditional structures from the past.

Jordi: The role of des Grieux is a dream role for tenors. It is also one of the most romantic characters a man can play. Des Grieux gives up everything for his love - his power, his money, his position and even his beliefs. That’s where the problem starts.

But still, there’s nothing more romantic than such passionate love. Because it’s true love. He also goes through so many emotional changes, the singer has to show that not only through acting, but through their voice. Everyone just has one voice, but if you are a tenor playing this role, you should make sure you create different voices and really show the audience what des Grieux is going through.

For example, the music for des Grieux requires you to sing leggiero, lyric, and tenor. But above all, for “Manon” to really succeed, the role of the soprano is really important. You need very good soprano to do this opera and I am so grateful to work together with Cristina.

The director said that although the story is set in 18th century France, he wanted to make it a modern story. Can you elaborate on that?

Pasaroiu: The libretto is the same. It’s based on a novel. We didn’t change anything. It’s exactly like it was written. But what we did was put [a modern] truth on stage.

In other words, we don’t play it, we feel it. If we do that, I believe the audience would feel it as well. This is the only difference.

This is possible because the story is very [based on reality.] People change and the environment changes, but what doesn’t change is how people feel. The emotions don’t change and that is what makes this opera modern.

The costumes of Manon and des Grieux, played by Cristina Pasaroiu and Ismael Jordi, from Act 1 through to Act 5. The Korea National Opera’s “Manon” will be staged at the Seoul Arts Center in southern Seoul from Thursday to Sunday. [KOREA NATIONAL OPERA]

What is your best scene in “Manon”?

Pasaroiu: For me, it’s the first moment Manon and des Grieux meet each other. How they meet each other is really appealing to me. It only takes one minute. They see each other, and they know they will be together and engage in this vow of love. On that spot, they decide to leave together for Paris. This is the most spontaneous scene of the opera. It’s pure and passionate. It’s also where the drama starts.

Jordi: For me, the best scene is at the monastery, where des Grieux becomes an Abbe (an abbot). But Manon comes to find him there. I like that scene because the music is amazing. The audience will be able to feel so much passion and power from des Grieux. How Massenet wrote the music on the libretto is perfect.

If you were your characters in real life, would you have made the same choices? How similar or different are you to the characters you play?

Pasaroiu: There are some similarities that allowed me to sympathize with her easily. But one major difference from myself and Manon is that I will never hesitate between money and love.

Cristina will never make compromises because of money. Manon is not a strong woman. She likes pleasure too much and that is why her parents decide to send her to an abbey, so that she can stay away from all the pleasures and temptations. Of course, I also like pleasures of life but not to such an extent.

Jordi: I think I can sympathize with des Grieux. He is a very sincere character and I believe I am a sincere man as well. I would probably live a similar life if I were in his shoes. I would also give up everything for love and I believe have done that already for my wife. I think in that sense, I really fit into this role (laughs).