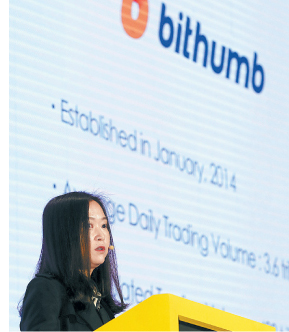 Lee Jung-a, vice president of Bithumb, speaks at the Distributed Economy forum on Wednesday at the Walkerhill Hotel in eastern Seoul. [YONHAP]

An executive at a major cryptocurrency exchange criticized the Korean government on Wednesday, calling its regulatory efforts an attempt to change the nature of cryptocurrency to make it easier to control.

“Bithumb has had numerous on-site inspections and investigations since the second half of 2016, but due to the absence of a legal basis for cryptocurrency, the regulations applied have been virtually the same as those for financial institutions,” said Lee Jung-a, vice president of Bithumb, during a speech at the Deconomy forum, an annual blockchain forum in Korea on Wednesday. “Looking at the regulatory measures, the most critical problem is the absence of standards and lack of market understanding.”

“It’s realistically difficult for cryptocurrency exchanges to follow all the standards established for financial institutions,” Lee added, saying exchanges must be able to handle the deposit and withdrawal of digital coins while staying connected to blockchain systems. Lee called the government’s effort “making a rugby ball into a football” so that it would be easier to predict where it will bounce to.

Cryptocurrency trading in Korea came under scrutiny from the government toward the end of 2017 after it became one of the hottest investment options here in the second half. Koreans flocked to local exchanges to buy and sell cryptocurrencies such as bitcoin and Ethereum, making Korea one of the largest trading countries in the world despite its small size. The fever forced up the price of coins traded in Korea to much higher than the global average, which foreign media dubbed the “kimchi premium.”

Local regulators, including the Financial Services Commission and the Ministry of Justice, began attempting to rein in the market at the end of 2017, rolling out a series of measures including banning the usage of so-called virtual accounts - anonymous temporary accounts used to buy and sell bitcoin.

Although the government began allowing trading again earlier this year after a brief halt, the volume is nowhere near where it was last year. The trading volume for Bithumb in January this year has fallen to one-tenth of what it was early last year, Lee said.

Lee admitted that the sudden growth of cryptocurrency trading generated some side effects but added that regulatory framework without proper knowledge would undermine the development of the industry entirely.

All the regulations aside, Bithumb is pushing to transform itself into a “comprehensive financial platform,” the vice president said, providing services including blockchain remittance and payment system that combine fiat and crypto currencies.