Can Kim do the job?

Can Kim do the job? 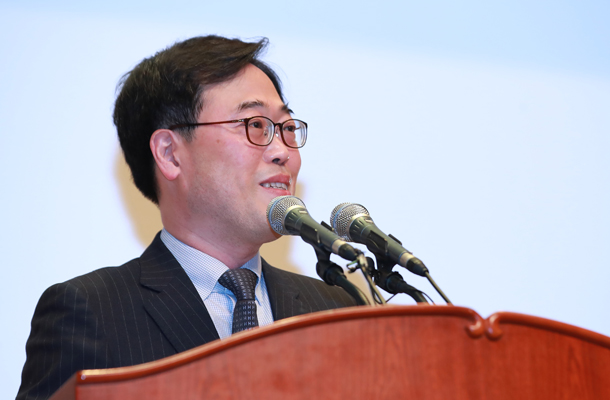 Kim Ki-sik, new head of the Financial Supervisory Service, on April 2 makes an inauguration speech at the headquarters of the government’s financial watchdog. [YONHAP]

A former senior government official who now acts as an adviser to a financial company told me that he wished the Me Too movement would spread to the financial industry. He was not referring to merely the ongoing exposing of sexual harassment and assault by powerful figures or celebrities, but the wider concept of abuses by powerful people.

The more powerful and higher up in the social ladder, the greater the number of victims. To financial institutions, the most powerful people are the state regulator. We hear no exposes of their abuses of power.

That is because the power of the Financial Supervisory Service (FSS) is unchallengeable. The institution watches over 57 banks, 62 insurance companies, 799 securities and investment advisory establishments and 3,474 other kinds of lenders in Korea. Although it does not directly supervise or regulate them, thousands of fintech and third-tier lenders also fall under its jurisdiction. Their viability is at the hands of the government’s financial watchdog as it can suspend businesses or end a financier’s career. No one dares to come forward about the excesses of the FSS. They prefer to keep their ordeals to themselves.

Even if they speak out, nothing can be done because the FSS’s mighty power is structural. A so-called authentic interpretation is the obligation and rights of an administrative office. Inquiries can be made through a phone call or email to other government offices. But the FSS is different. A senior executive of a financial firm must pay a visit first to the FSS and seek permission to inquire about the interpretation of a certain statute before bringing up a question.

During the KB Financial Group’s feud with the government over selection of a new chairman a few years back, a senior executive was called upon late at night to immediately report to the FSS. An inspector from the FSS forced a banker to write up his report on his behalf. The committee that reviews penalty decisions is even more frightful. The executive subject to penalties is not even given a chance to explain. The right to defense is ruled out. It is more or less impossible to undo unjust investigation. Despite such outrageous power, no one can complain.

The financial sector is different from other industries. Regulations and licenses can define the fate of the industry. The authority does not simply control and supervise. It is the captain holding the steering wheel. Financial institutions must follow its orders. They have only two choices, either obey or leave. Although the government pledged to promote fintech, peer-to-peer investment is still capped at 10 million won ($9,400). Internet-only banks can hardly recapitalize due to its regulations. Yet no one dares to grumble. Much of the responsibility for our financial sector being on par with African standards is owed to the state regulator.

My conversation with the former bureaucrat moved onto the new head of the FSS, Kim Ki-sik. Unlike his predecessors, Kim came from a civic activist group. He is an outsider to the world of finance. He may not have a bureaucratic eye for details. As a lawmaker, he used to challenge financial policies with frankness. He was even dubbed the “Angel of Death” by financiers.

Will he be able to correct the unjust ways of the FSS? He would set a milestone for just doing that. But it may not be easy. Bureaucrats are defensive of their authoritative prerogatives. Will he be any different or is this all just wishful thinking?