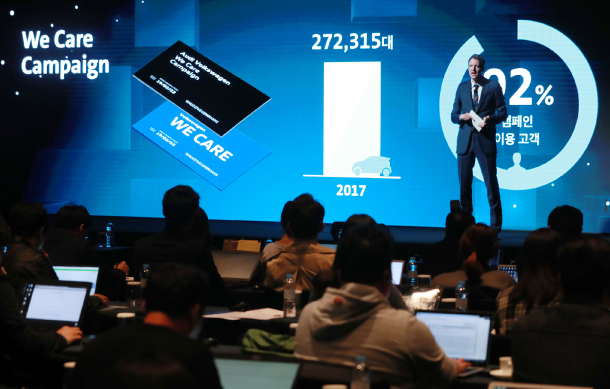 Audi Volkswagen Korea finally apologized to its customers on Friday for its emissions rigging scandal, though many owners are still upset about what they see as an unfair compensation plan.

“We know we have disappointed many people who gave trust to Audi Volkswagen,” said Rene Koneberg, Audi Volkswagen Korea’s co-managing director in charge of business strategy, at a press conference held Friday in central Seoul. “I would like to take this opportunity to give my sincere apology. We are doing everything in our power to regain the trust we have lost.”

It was the first apology from the German automotive company after it was found to have used software to cheat on diesel emissions tests and its sales were banned in Korea in 2016.

Volkswagen CEO Matthias Muller sent a video message as well containing his apology and promise for “full commitment” to Korea in the future.

Koneberg and Marcus Hellmann were appointed co-directors of the Korean unit last year. Hellmann is in charge of legal and compliance issues.

“Diesel issue is very painful for Audi Volkswagen Korea and the entire Volkswagen group,” Hellmann said. “We deeply regret it. Two years and seven months have passed, but the topic is still ongoing … It is a chance for us for a new beginning and transforming AVK,” Hellmann added.

Audi Volkswagen Korea launched a campaign it’s calling “A Trusted Partner for Sustainable Future,” on Friday. It is pledging to become a company that doesn’t just sell cars, but also contributes to society.

In collaboration with local non-governmental organizations, Audi Volkswagen Korea said it will invest 10 billion won ($9.4 million) over the next three years in diverse education and cultural programs, which include launching a new space dedicated to the program called AVK Dream Studio.

Audi Volkswagen Korea had sales of most of its models suspended in July 2016. The Volkswagen brand didn’t sell a single car in Korea last year.

Volkswagen started a recall of its Tiguan SUV in February 2017, and 58 percent of the registered Tiguan drivers have updated the illegal software device so far, according to the company.

The Ministry of Environment approved all the recall plans submitted by Audi Volkswagen last month for its models equipped with the problematic EA189 diesel engine, allowing the auto company to update the software on 125,515 cars running on Korean roads.

The company’s answers on its compensation plan didn’t satisfy many Korean customers, though.

Alongside the software fix, Audi Volkswagen Korea has been giving out vouchers worth 1 million won to its customers as part of the “We Care Campaign.” In the United States, however, the German automaker agreed to give the trade-in value of the affected vehicle and up to $10,000 as additional compensation.

When asked if the Korean unit has additional plans to pay owners back, Hellmann said that Audi Volkswagen “takes every customer seriously irrespective of where he or she lives,” though he didn’t elaborate further.

Following claims from abroad that the cheating software resulted in worsened fuel economy and engine performance, customers filed ongoing lawsuits against the Ministry of Environment for approving the company’s compensation plan.

Hellmann said there were no problems with fuel efficiency and engine durability in vehicles with updated systems.

Audi Volkswagen Korea said it will launch 40 new models under its Audi, Volkswagen, Lamborghini and Bentley brands over the next three years. Based on the German automaker’s e-mobility strategy, 25 percent of its cars sold in Korea will run on electric powertrains by 2020. The Audi e-tron is likely to be the company’s first electric model to arrive in Korea.