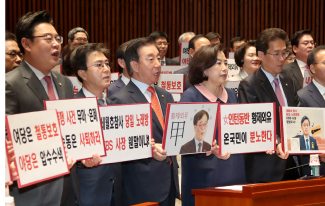 Lawmakers of the main opposition Liberty Korea Party stage picketting in the National Assembly on Monday to demand that Kim Ki-sik, the new head of the Financial Supervisory Service, resign. [YONHAP]

The Blue House on Monday rejected growing calls to dismiss the new head of the Financial Supervisor Service (FSS), saying controversial overseas trips that Kim Ki-sik made as a lawmaker were all for legitimate reasons.

Kim has found himself in a harsh spotlight after it was revealed he embarked on three overseas trips for which the expenses were paid by financial institutions he was supposed to oversee.

The presidential office said its own probe, launched on the command of presidential chief of staff Im Jong-seok, found no wrongdoing on the part of Kim. It said the outcome of the probe proved all of the trips were “for the public cause” and “legitimate.”

“These trips were intended to help related institutions’ overseas business, as well as keep in check how budgets were used by those institutions there,” said Kim Eui-kyeom, the Blue House spokesman during a press briefing hastily arranged to address the issue.

Kim acknowledged that Kim’s trips as a lawmaker “fell short of people’s standards and expectations.” But he noted they were “not serious enough to warrant dismissal.”

Criticism has been snowballing against Kim, who took the helm of the FSS on April 2, over three overseas trips he took in 2014 and 2015 as an opposition lawmaker who belonged to the parliamentary national committee, a position that gave him authority to oversee financial institutions and companies.

In March 2014, Kim went on a three-day trip to Uzbekistan sponsored by the Korea Exchange to review a proposal to help the nation set up a stock exchange.

In May 2015, he embarked on a four-day trip to Chongqing, China and Chennai, India with expenses paid by Woori Bank. In Chongqing, he attended an opening ceremony for Woori’s regional branch.

The same month, Kim visited the United States and Europe on a 10-day trip sponsored by the state-funded Korea Institute for International Economic Policy (KIEP).

Revealing that an intern from Kim’s parliamentary office accompanied him on his 10-day trip in 2015, the opposition LKP intensified its demand for Kim’s resignation and prosecutorial investigation for possible bribery on Monday.

Kim earlier explained that a policy advisor accompanied him on a trip that included stops in Washington, Brussel and Rome, among others, a claim that the LKP called a lie.

“The intern who accompanied Kim was not a regular ninth-grade policy secretary, but was in an internship,” said Kim Sung-tae, the LKP’s floor leader. He said the intern was promoted to a ninth-grade secretary right after the trip and had another promotion to a seventh-grade position in February 2016, raising suspicions of special treatment.

In response to new allegations, the FSS issued a statement on behalf of its new chief, saying the intern had assisted Kim in policy areas. On the question of special treatment, the FSS said Kim had other interns in his office promoted when there was a vacancy.

Kim’s appointment to the FSS was seen by analysts as part of President Moon Jae-in’s attempt to reform the financial industry. The former lawmaker built his career as a strong critic of the finance industry, which he said was too reliant on Korea’s big conglomerates and banks.

Kim, who majored in anthropology at Seoul National University, is the first non-public official to head the FSS.