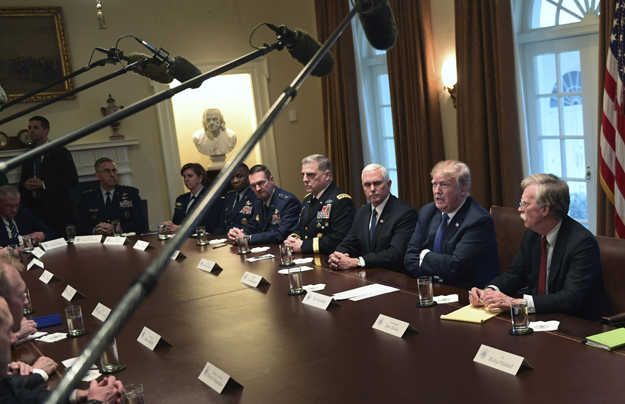 U.S. President Donald Trump, second to right, speaks at a meeting with military leaders at the White House on Monday. To his right is his new National Security Advisor John Bolton. [AP/YONHAP]

U.S. President Donald Trump said Monday he planned to meet North Korean leader Kim Jong-un next month or in early June, adding he hoped to “make a deal” on denuclearization.

Speaking to reporters ahead of a cabinet meeting on foreign policy at the White House, Trump said, “We’ve been in touch with North Korea - we’ll be meeting with them sometime in May or early June.”

The president added that a meeting “is being set up with North Korea,” confirming in person that preparations for a summit are in progress, in line with reports over the weekend of direct back-channels of communication being used by the two countries.

“I think there’ll be great respect paid by both parties, and hopefully we’ll be able to make a deal on the de-nuking of North Korea,” he continued. “They’ve said so; we’ve said so. Hopefully, it will be a relationship that’s much different than it’s been for many, many years.”

Though Trump previously disparaged Kim by calling him “Little Rocket Man,” he said Monday the upcoming meeting is “going to be a very exciting thing for the world,” setting an optimistic note for what would be a historic first summit between the leaders of the United States and North Korea.

Kim also publicly referred to U.S.-North Korea talks for the first time Monday - though not a summit - indicating progress in preparations. Kim made mention of the prospect of North Korea-U.S. dialogue while speaking to the ruling Workers’ Party officials, breaking his silence on the subject.

But the lack of a concrete date, as well as Trump raising the possibility that the meeting could take place a little later than expected in June, seems to reflect that the two sides have yet to come to an agreement on a location.

Trump initially indicated that he would meet with Kim Jong-un “by May,” after a briefing by Chung Eui-yong, South Korean President Moon Jae-in’s envoy and national security adviser back in March.

Some possible venues have been floated including Mongolia and Sweden, but analysts have pointed out that third-country locations could pose security issues.

However, Trump is unlikely to agree to visit Pyongyang, as desired by the North. It also appears that venues in countries with direct political involvement in the issue, such as Beijing and Moscow, as well as locations in South Korea such as the capital Seoul or Jeju Island, are being ruled out by Washington.

The slight delay in the summit could also indicate problems with the issue of the denuclearization of North Korea.

North Korea has relayed its willingness to consider a “phased and synchronized” approach toward denuclearization, a message that leader Kim conveyed to Chinese President Xi Jinping in Beijing last month, which has been echoed by his diplomats.

Analysts wonder if the two sides will be able to see eye-to-eye on what constitutes denuclearization and a timeline for the dismantling of the North’s nuclear program.

During the cabinet meeting, Trump again made remarks that appeared to link a trade deal with South Korea with security issues involving the North. He said, “And as I said, the North Korea and South Korea situation…complicates it - the deal that we have with South Korea.” But he added, “I think it’s going to be a very fair deal. We want a fair deal.”

Trump has long criticized the free trade agreement with South Korea as a “horrible deal.” At the end of last month, Trump, speaking at a rally in Richfield, Ohio, appeared to consider delaying trade negotiations with South Korea to use them as leverage for reaching a deal with North Korea “because it’s a very strong card.”

Trump’s remark in Ohio came after Seoul settled disputes with Washington over steel tariffs and the revision of their bilateral FTA. Noh Kyu-duk, spokesman for South Korea’s Ministry of Foreign Affairs, dismissed concerns of the Trump-Kim summit failing, and said Tuesday, “Our government has played a leading role in the process to hold the inter-Korean and North-U.S. summits starting with the PyeongChang Olympics, and based on close cooperation between South Korea and the United States, will be going forward to actively work toward the resolution of the North Korean nuclear issue and ensure the peace and stability of the Korean Peninsula.”