Marvel stars stop in Seoul ahead of latest ‘Avengers’

Marvel stars stop in Seoul ahead of latest ‘Avengers’ 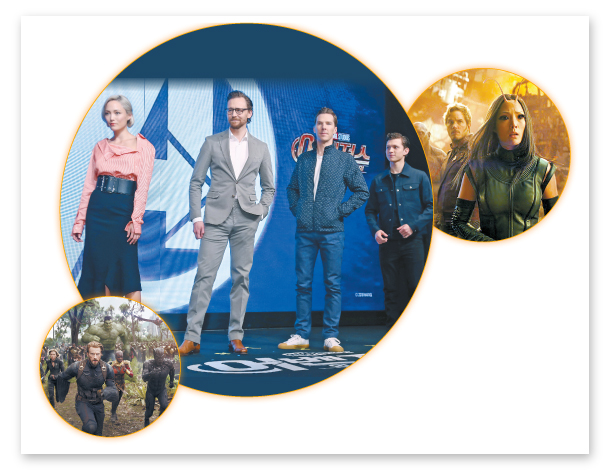 The Marvel Cinematic Universe (MCU) kicked off a decade ago with “Iron Man,” and has gradually expanded ever since. The series of films will reach a climax in the long-awaited superhero mashup, “Avengers: Infinity War,” which is scheduled for theatrical release later this month.

“It’s a real thrill to be here. It’s my first time in Korea, so I’m very excited to be here,” said Cumberbatch, who plays Doctor Strange, a superhero with the ability to travel great distances in an instant by opening portals between dimensions.

Benedict boasts many fans in Korea not only for his appearances in the Marvel films, but also for his roles as Sherlock Holmes in BBC’s crime television series and Hamlet in a stage production that played in theaters.

When asked about Marvel’s success, the actor explained that, just like any other piece of pop culture, the movies reflect social events. But what makes Marvel flicks powerful is that they’re filled with humor and multidimensional characters, not to mention their “beautifully structured stories,” according to Cumberbatch.

Also visiting Korea for the first time since joining the superhero series was Klementieff, who appeared in 2017’s “Guardians of the Galaxy 2” as the mind-reading alien Mantis, who is recognizable for her antenna and big, innocent bug eyes.

The French actor, who has a Korean mother, expressed that it was a thrill to be a part of the Avengers and shared her excitement about visiting Korea.

Her name Pom is a combination of Korean words bom and beom, which translate to spring and tiger, respectively.

“It’s incredible [to be part of MCU]. I remember watching Marvel movies even when I wasn’t part of the cast … Just to be a part of it and work with these incredible people and others is a dream come true, and I feel really lucky,” said Klementieff.

While refraining from revealing too much, Pom hinted that her character in the upcoming film has a little bit more confidence.

The upcoming action fantasy adventure, again directed by Anthony and Joe Russo, skips forward two years after the Avengers were torn apart in the events of “Captain America: Civil War” (2016). The premise in the upcoming third Avengers film is that Thanos, the ultimate villain, arrives on Earth to collect the Infinity Stones for a gauntlet that would give him the power to randomly exterminate half of the universe’s population.

In the film, Peter Parker receive a major upgrade and is given a brand new Spider-Man suit from Tony Stark. Although it may look fancier and more high-tech on the big screen, that wasn’t how it felt for Holland on set.

The new suit looks “really awesome,” but in real life, it’s “really lame,” according to Holland, who was making his second visit to Korea.

He last visited in July to promote his Marvel debut “Spider-Man: Homecoming.” On set, his suit basically looks like “pajamas with holes that glow,” the actor said with a laugh.

As for Tom Hiddleston, who has been involved in the MCU for the longest time of the four visiting stars, “watching [the series] grow and expand as a fan has been amazing.”

The actor, who plays the mischievous Loki, said that Marvel films have become “bigger and braver with more risks” since he first began a part of the universe.

The third Avengers movie, which brings together dozens of Marvel superheroes, including Black Panther, Hulk and Black Widow, will arrive in local theaters on April 25.