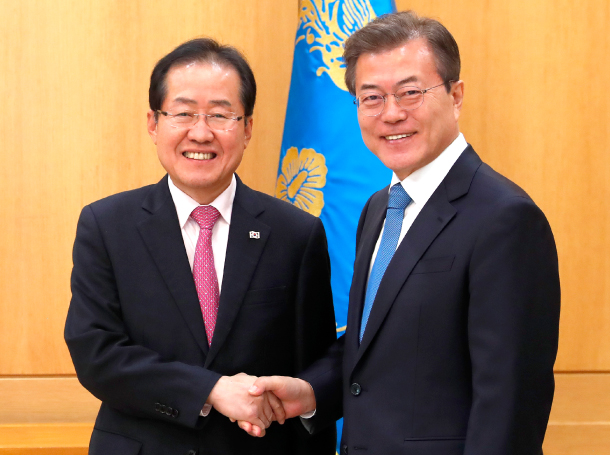 President Moon Jae-in, right, shakes hands with Hong Joon-pyo, head of the main opposition Liberty Korea Party, before a one-on-one meeting at the Blue House in Seoul on Friday. [YONHAP]

In an 80-minute meeting with Hong Joon-pyo, chairman of the Liberty Korea Party, Moon sought the opposition’s cooperation in inter-Korean talks scheduled for April 27 at the border village of Panmunjom. It was the first time that the two met one on one since Moon defeated Hong in the presidential election last May.

Hong, a conservative, has been an avid opponent of Moon’s efforts to engage with North Korea. During their meeting, Moon told Hong that, while “rational advice” from the opposition was desirable, it would not be right for the Liberty Korea Party to reject the summit altogether.

He asked for “bipartisan cooperation” in the upcoming talks, according to Han Byung-do, a senior presidential aide who briefed reporters on the closed-door meeting. Han was present at the meeting.

During a meeting with Chinese President Xi Jinping last month, Kim said he would entertain the idea if Seoul and Washington “respond to our efforts with goodwill and create an atmosphere of peace and stability while taking progressive and synchronous measures.”

Kim is expected to meet with U.S. President Donald Trump in late May or early June in what would be the first summit between a North Korean and American leader.

In response to Moon, Hong said his party was not opposed to talks but warned that “past mistakes should not be repeated.” Hong was referring to the North’s previous violations of agreements it made with the international community to give up its nuclear program in the 1990s and 2000s.

After speaking with Moon, Hong held a meeting with party lawmakers at the National Assembly to discuss his conversation with Moon. He reiterated his stance that North Korea should adopt a “Libya-style” denuclearization process in which the North gives up all its weapons within a span of six months to a year.

Hong said he told Moon that he was not against the summits but emphasized that talks must be about the North’s denuclearization. He objected to the administration’s position that denuclearization ought to be gradual.

He also made clear that economic sanctions should remain in place until the North completely gets rid of its nuclear weapons.

During his meeting with Moon, Hong voiced concerns about what he called a “weakening Korea-U.S. alliance” spurred by the Moon government’s policies, without elaborating what those policies were. He called on the president to take corrective measures to restore the alliance.

Reiterating his suspicions toward Kim, Hong warned Moon of a “fake peace” resulting from the summit, saying the North’s “fake charm offensive” would do no good for the people of South Korea.