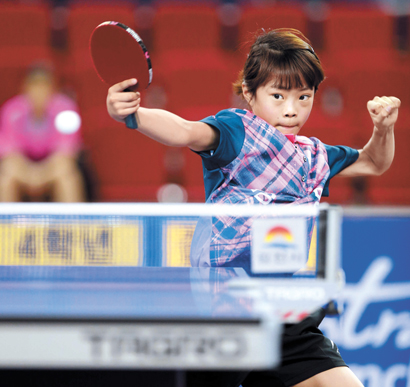 Yoo Ye-rin hits a return during the national elementary school championship in North Gyeongsang on April 10. [THE PING PONG]

Nine-year-old Yoo Ye-rin is following in the footsteps of her legendary father, Yoo Nam-kyu, the first man to ever win gold in singles table tennis at the Olympics.

Yoo Nam-kyu is one of the most successful players in Korean table tennis history. When the sport had its Olympic debut at the 1988 Seoul Summer Games, he won gold in the men’s singles event and bronze in doubles with Ahn Jae-hyung.

Now, he’s training his daughter to become the country’s next table tennis star.

In Korean sports, there have been plenty of father-son duos - Lee Jong-bum and his son Lee Jung-hoo of the Nexen Heroes; Hur Jae, head coach of the national basketball team, and his sons Hur Woong and Hur Hoon. But there has never been a father-daughter pair.

Yoo Ye-rin is only in fourth grade, but she is considered a hopeful in Korean table tennis, dominating the singles event in her age division. At the national elementary school championship in North Gyeongsang on April 10, she won the event with a backhand drive stroke that is normally achieved by sixth and seventh graders.

The championship is the oldest table tennis event for elementary school students in the country and has a long history of exposing new talent. Ryu Seung-min, who won gold at the 2004 Summer Olympics in men’s singles, and Kim Kyung-ah, a bronze medalist in women’s singles at the 2004 Games, were both discovered from the championship.

“I was nervous playing in the finals, but I’m happy that I won,” Yoo Ye-rin said after the match.

Her father was elated, too. “I was happier than when I won gold at the Olympics,” he said.

Once or twice a week, the Yoos train together by playing against each other. “It feels good when I successfully hit a backhand drive,” the daughter said. Her father quipped, “If I want to return her ball in 10 years, I need to stay healthy.”

Yoo Nam-kyu never intended for his daughter to become a competitive table tennis player. He was well aware of the tough training needed to get to the Olympics and didn’t want her to go through the same.

But from a young age, Yoo Ye-rin demonstrated a knack for athletics. In kindergarten, she skied, figure skated and ran in races. When she hit 5, Yoo Nam-kyu decided to start teaching her table tennis.

“I tied a table tennis ball to the ceiling of our house with an elastic band and told her to hit it with a tennis racket just for fun,” the father recalled. “But as soon as she got on the step, she was hitting the ball with her own rhythm. That’s when I realized maybe I could teach her table tennis.”

After a long discussion with his wife, Yoo Nam-kyu enrolled their daughter in a competitive table tennis program at an elementary school in February 2015, when Yoo Ye-rin was 6.

“I was going to let her compete for three years, and if she didn’t play well, I was going to make her quit,” Yoo Nam-kyu recalled.

It didn’t take long for Yoo Ye-rin to defy her father’s expectations.

At a national competition in March 2016, she finished runner-up in the first-to-second-grade division and won the singles event at the Kyobo Dream Cup in July 2017.

“It is very tiring for a first and second grader to train for an hour,” Yoo Nam-kyu said. “But Ye-rin seems fine even after two to three hours of training.”

Yoo Ye-rin is currently ranked first in her age division in Korea.

From watching videos of her father play during the 1980s and ’90s, Yoo Ye-rin is aware that he won a gold medal at the Olympics but doesn’t fully understand her father’s legacy in the sport. Rather, she jokes about the perm he had when he was younger.

Still, as a table tennis player, Yoo Ye-rin looks up to her father. “When we go to restaurants, there are people asking for his autograph,” she said. “It’s really cool sometimes.”

For Yoo Nam-kyu, the family ties bring a little concern. “Once she gets to middle school, she’ll get the label of ‘Yoo Nam-kyu’s daughter,’” he said. “To block out such comments, she needs to be stronger, but for now, I want her to enjoy table tennis. I always tell her that for now, it’s O.K. to not win.”