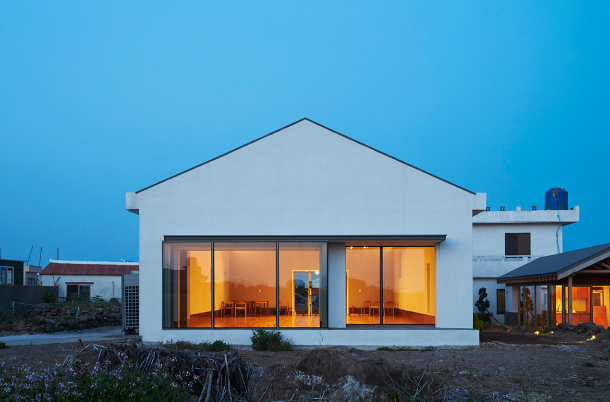 The new town hall built on Gapa Island has been renovated from an abandoned warehouse building, with a big window to look out towards the picturesque scenery. [HYUNDAI CARD]

Gapa Island lies a 15-minute boat ride off the southern shores of Jeju Island, just north of Korea’s southernmost island, Mara Island. Despite only being 0.84 square kilometers (0.32 square miles) in size and home to less than 200 residents in total, the island sees tens of thousands of visitors each year who come to see the vast green barley field dance in the wind like waves. Now with the help of the Jeju Special Self-Governing Province and Hyundai Card, the island has opened up a new chapter in its history through the “gapado Project,” a renovation of the island to allow both tourists and residents an experience like nowhere else.

The project, which was conceived in 2012 and began in 2013, is intentionally spelled “gapado” with lowercase letters to symbolize the island’s flat shape, with the highest point of the island reaching only 24 meters (78 feet) above sea level. The project’s slogan is “change for preservation,” according to Ted Chung, CEO of Hyundai Card.

“I first visited this island six years ago with my wife and was instantly mesmerized by its beauty,” said Chung on April 12, the opening day for the project. “The biggest goal of our project was to preserve as much as we could, while developing the things that needed change. Preservation can be [paralyzing] for a community, while over-development could actually lead to its natural beauty being forgotten, so we had to come up with a way to go in between the two.”

Last year, the island saw over 60,000 visitors, but the vast majority of the tourists only came in spring to see the green barley fields and left after having a stroll instead of staying through the night and spending money on the island. The project focused on encouraging tourists to stay and giving residents an opportunity to make an income.

The balance between preservation and change took place by making use of the foundations of existing buildings for the six new facilities that have been added to the island - the terminal, a snack bar, cottages, town hall, a fishery center and an artists’ residence. Each utilized the old structures of buildings that had been built in the past. The new terminal was renovated from the old one, the fishery center went through a makeover and added a restaurant, the town hall was an abandoned warehouse, the cottages were empty houses and the artists’ residence was built from the leftovers of a construction site for a hotel that began 20 years ago. 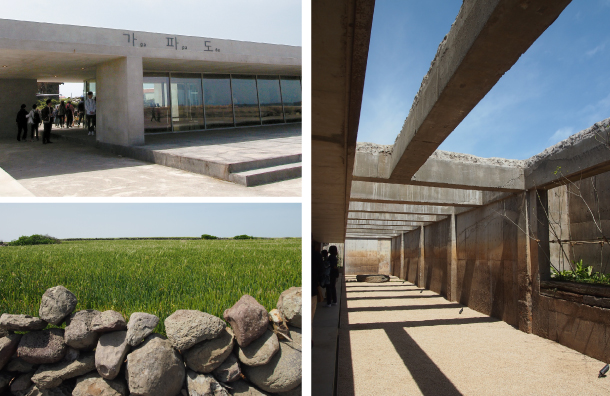 The terminal on Gapa Island, top left, has been transformed into a single-story building to blend in with the peaceful landscape of the island, bottom left. The AiR (Artist in Residence) building has been renovated from an old construction site, and the remnants are still visible. [YOON SO-YEON]

Although the new buildings have been designed with a modern touch, the fresh additions to the landscape were built low and painted white, so as not to spoil the island’s natural scenery, according to architect Choi Wook from studio One O One who oversaw the design of the buildings. “We see the landscape of the island, and feel the atmosphere of the sea as visitors. But for the people here, this is their future and their lives. So to ensure that they can build their own futures, we used construction materials that would be easy for the residents to fix on their own,” said Choi.

The terminal had been cut down into a single-story building from its previous two stories, so that visitors to the island can see the picturesque scenery as soon as they set foot on the dock. Inside the terminal is a cafe and a souvenir shop, where visitors can get their hands on sea food collected by the haenyeo, the indigenous female divers of the island. Visitors may also taste fresh sea treats collected and cooked by haenyeo at the fishery center, next to which is a restaurant that sells western food for younger tourists.

All of the new buildings opened their doors on April 12 and they will be run by residents. Revenue will be divided among those living on the island, except for the artists’ residence named AiR, which will be managed by Hyundai Card until 2020. As of now, there are seven artists who will be creating art related to the island until later this year. Their works are put on display in the entrance hall for tourists to enjoy. The building itself is a work of art, as the architect managed to mix old remnants of the construction site with elements of modern architecture and design. The cohabitation of the old and abandoned with modernity is a site worth seeing.

“Gapa Island is an island that misses people,” said Kim Dong-ok, head of the village. “Not many people come to the island, and even those who do are just passing by to get to Mara Island. I hope that the project will bring a great change to the lifestyle of the people. We thank both the Jeju provincial government and Hyundai Card.”