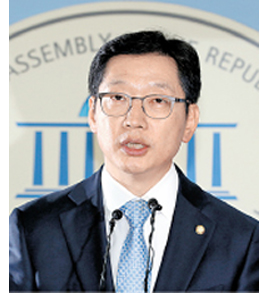 Rep. Kim Kyoung-soo of the Democratic Party holds a press conference at the National Assembly on Monday to refute reports about his involvement in an online opinion manipulation campaign. [YONHAP]

Police are looking into whether expelled members of the ruling Democratic Party ran a systematic online opinion manipulation campaign to tilt the race in favor of Moon Jae-in’s candidacy in last year’s presidential election, a probe that could prove to be embarrassing for the Blue House and ruling party ahead of the June 13 local elections.

Police have three former members of the DP in custody on suspicions that they ran an online campaign to manipulate public opinion on political affairs. One of the three suspects, identified as a 49-year-old surnamed Kim, is a power blogger who uses the ID Druking written in Korean on his blog. He has been found to have communicated with Rep. Kim Kyoung-soo of the DP, one of the closest aides to President Moon, through the mobile app Telegram.

While the police have yet to announce whether Kim, who runs a publishing company called Elm Tree, and his staff were involved in cyber campaigning during the 2017 by-presidential election, the opposition says they were. They are demanding a special prosecutorial probe to get to the bottom of a scandal they say bears resemblance to a cyber smear campaign perpetrated by the intelligence agency in the 2012 presidential race against Moon and in favor of rival candidate Park Geun-hye.

Kim, under the name Druking, reportedly sent hundreds of messages to Kim Kyoung-soo, Moon’s confidante, sparking speculation that the politician was behind the power blogger’s political operations.

The messages include the blogger’s demand for a senior government position for his acquaintance in return for his activity.

Police have access to those messages. “Most messages involve Kim’s one-way messages to Kim Kyoung-soo that have not even been read by the latter,” said Lee Ju-min, commissioner of the Seoul Metropolitan Police Agency, adding that some messages related to the suspect’s demand for a senior government position. It was reported that the blogger demanded the position of consul general in Osaka for his acquaintance.

Lee also noted that Kim Kyoung-soo thanked the blogger as a courtesy in text exchanges, but it is not clear what the lawmaker thanked the latter Kim for.

While much of what the blogger and his team did during the election last year is not yet known, the fact that he had communications with one of the most-trusted aides of the president comes as an embarrassment to the ruling party and the presidential office.

In a rushed move to allay rising suspicions over his relationship with the blogger, Kim Kyoung-soo held a press briefing Saturday, strongly denying he gave any improper commands to the blogger or his group on cyber operations.

“At the center of this scandal is the [suspects’] smear campaign against the Moon government after their absurd demands [for high government positions] were turned down,” he said.

In line with the police’s announcement Monday that lawmaker Kim mostly left messages from the blogger unread, he said media reports that he had “exchanged hundreds of text messages” with blogger Kim were false.

Kim emphasized he had nothing to do with the blogger at another press briefing on Monday at the National Assembly, describing the opposition’s criticism as “politically motivated” ahead of the June 13 local elections.

“I find it very troubling that there are media reports suggesting that I am behind some deviant acts of individuals without fact-checking and thus exaggerating unfounded suspicions,” said the first-term lawmaker, warning that opposition parties will receive a grave verdict from voters in the upcoming elections for what he called “political attacks.” Kim is preparing to run for the South Gyeongsang governorship.

The lawmaker, however, acknowledged that he referred the blogger’s appointment recommendation to the Blue House for vetting. “The person [recommended by the blogger] was a graduate of a renowned university in Japan and was employed at a major law firm,” said the lawmaker, “So I referred the recommendation to the presidential office though I did not know whether the person would get the job.”

A senior presidential official speaking on the condition of anonymity acknowledged it received the recommendation and vetted the person for the Osaka position. The Blue House concluded the person was “not fit” to serve in the role, the official said.

While the presidential official insisted there was no irregularity involved in the process, the Blue House’s stance on Monday was a turnaround in its position just hours earlier when it said it didn’t know about Druking’s job offer demand to Rep. Kim until the media reports, a claim proved to be false.

Early Monday, the Blue House said it neither knew about the online campaign done by the three suspects nor Druking’s job offer demand.

Kim and two of his employees at the publishing company, identified as Woo, 32, and Yang, 35, were arrested on March 22 for running a more recent smear campaign against Moon’s government on Naver, Korea’s largest portal site. Seoul police chief Lee said the police had identified two more suspects in the case who were not detained.

In recent months, they are suspected of running a program through which one is able to input multiple comments or likes for particular comments on Naver stories.

Over a period of four hours on the night of Jan. 17 and into the next day, the trio had made 614 likes for remarks criticizing President Moon’s decision to field a joint women’s hockey team with North Korea for the 2018 PyeongChang Winter Olympic Games, according to the police.

It is unclear why their recent campaign criticized the Moon government. If Rep. Kim’s claim is taken at face value, they might have been disgruntled that their demands for senior position in return for their campaign activity last year, which have yet to be specified, were turned down.

Commissioner Lee said the investigation was “focused on a smear campaign conducted on Jan. 17” against the Moon government. “After we get this probe done, we will look into other crimes related to this,” he said.

The fact that Kim’s publishing company has not published a single book since its founding eight years ago has compounded suspicions about their online activity prior to Jan. 17 operation and how they were funded. The ruling DP moved swiftly on Monday to distance itself from the suspects.

It expelled the three on Monday and said the online campaign was a “deviant act of an individual.”

“The DP will aggressively counter political attacks aimed at Rep. Kim Kyoung-soo just because he received messages from the suspect,” said DP Chairwoman Choo Mi-ae at a party leadership meeting at the National Assembly.

Woo Won-shik, the DP’s floor leader, said the scandal differed from the smear campaign done on behalf of Park Geun-hye in 2012 because state institutions such as the National Intelligence Service were systematically mobilized for that cyber campaign.

The opposition parties slammed the DP and the government.

“The DP should not mislead the public by saying this was simply an individual’s deviant act. If they are confident about their integrity, they should call for a special prosecutorial probe themselves,” said Chang Je-won, the major opposition Liberty Korea Party’s spokesman.