More Chinese are coming, but not in group tours

More Chinese are coming, but not in group tours 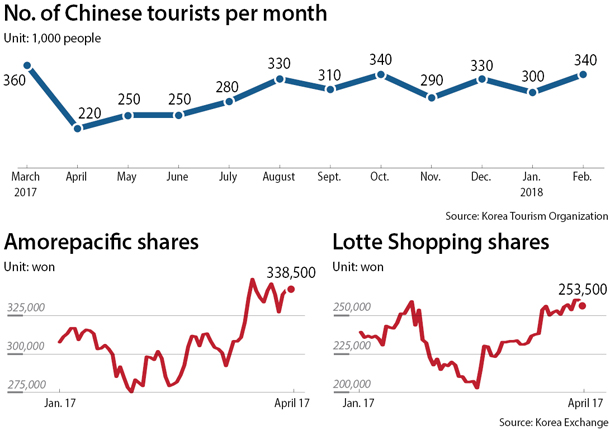 While the number of Chinese visitors to Korea rapidly recovered in March, they’re not coming through the large group tours they once did. That’s despite a Chinese minister’s implication that Beijing’s economic retaliation against Korea, which put a stop to group tours, would end soon.

“There’s no work to do [here] because tour agencies in China are not recruiting customers,” said one senior manager of a local tour agency for travelers from China and Southeast Asia. “Since last winter, we’ve started to focus on Vietnam instead.”

It’s been almost three weeks since Yang’s statement, and the number of tour groups visiting Korea has barely budged, though the total number of Chinese visitors to Korea topped 400,000 in March for the first time since February last year, according to the Justice Ministry. However, industry sources and officials say that in terms of group tours, little has improved, attributing the ongoing increase in visitors to friendlier sentiments from Chinese people, who are now finding ways other than group tours to enter Korea.

The return of Chinese tour groups will boost the sluggish performance of local tour agencies, hotels and duty-free outlets, which suffered from their absence last year.

“We’re receiving updates on China from a local office but nothing has changed,” said Jung Geun-hee, an official at the Korea Tourism Organization. “The issue with Chinese group tours is always a sensitive one, so [unless the Chinese government changes its policy] we can’t make rash moves.”

Shares of China-related companies like cosmetics maker Amorepacific saw gains earlier this month after Yang’s statement, but since then they have wavered up and down.

Tourism infrastructure in Korea has been severely damaged over the past two years. Around a quarter of the local tour agencies that mainly did business with China closed down.

“Between January and February, we called all 121 member companies and found out that 30 were either out of business or it was difficult to reach the CEO,” said a source at the Asia Inbound Tourism Association. Some agencies went bankrupt, and others set up offices in Southeast Asia and Japan for Chinese tourists.

Rather than go to Korea on group tours, more individual Chinese are coming to Korea to scoop up duty-free goods and resell them back home, and local tour guides are changing their tactics to focus on these entrepreneurial visitors.

Many local tour companies have transformed into businesses that are focused on duty-free sales.

Industry insiders say that existing Korean tour agencies can now be described as serving two kinds of customers - either general tourists or Chinese daigou, individuals who purchase large amounts of goods in Korea to resell them in China. Daigou agencies send their guests to duty-free stores and receive commission fees in return.

More general tour agencies are focusing on daigou travelers. One company received general tourists until last winter, but became a daigou agency this spring. “The profits come from duty-free,” said an employee. “For daigou, the fee is double that of ordinary tourists.”

“Apart from the official commission fee, another problem is incentives, such as rebates given to tour offices that raise the most sales,” said an industry source that spoke on the condition of anonymity. “This is part of the vicious cycle that motivates tour agencies to focus on duty-free shopping and less on traveling.”

The 20,000 or so Chinese group tourists who came in February during the PyeongChang Olympics didn’t help much.

“They were people who came for the Korean visa,” said the CEO of a tour agency that brought in more than 1,500 group tourists for the Olympics. The Korean government offered Chinese nationals who bought tickets for the Games a tourist visa effective for the next five years.

“Rather than hastily seeking group tourists, a better task would be looking at current practices in tourism and improving them,” said Lee Youn-taek, a professor of tourism science at Hanyang University.