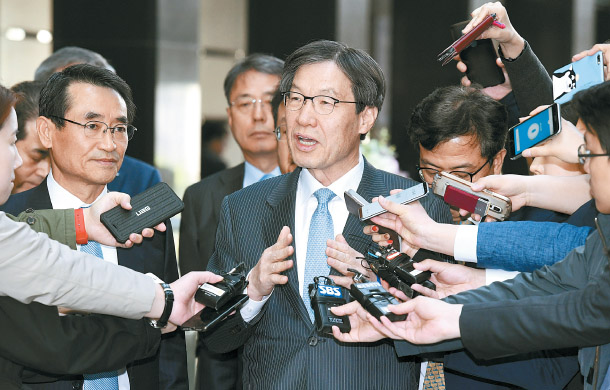 Posco CEO Kwon Oh-joon answers questions from reporters at the steelmaker’s headquarters in southern Seoul on Wednesday, after he announced that he would resign at a board meeting. [YONHAP]

Kwon Oh-joon, the CEO of Korea’s largest steelmaker Posco, said he will resign at a hastily called board meeting at the company’s headquarters in southern Seoul on Wednesday.

“I think it’s best for Posco to have a younger and more talented leader to survive another half century,” Kwon said in a statement after the meeting.

Following Kwon’s announcement, Posco board directors have started the search for a new leader for the company. A counsel dedicated to appointing a new CEO consisting of five outside directors plus Kwon will have its first meeting early next week to discuss the nomination’s timeline and procedure.

Kwon will keep his job until a new CEO takes over. The company said it is trying to make the transition period as short as possible, and it is expected to take roughly two to three months, according to industry sources.

Ever since Kwon managed to secure a second term as CEO of Posco in a shareholders’ meeting in April 2017, there were doubts about whether he would be able to fully serve the term, which ends in 2020.

No CEO of Posco, except for its founder Park Tae-joon, was able to serve a full second term at the company, mostly due to political pressure.

Kwon took office in 2014 under the former Park Geun-hye administration. Under the Moon administration, Kwon was not invited on Moon’s four overseas economic trips, while other business leaders followed along.

Posco claimed Kwon stepped down due to health issues and denied speculation about political pressure kicking on the CEO. But industry analysts believe there’s more to the story.

“This is something I cannot control,” said Kwon on the rumors of political pressure at a press briefing held on March 31. “I think the best I can do is manage the company based on transparent and fair principles.”

Hwang Chang-gyu, the head of KT, another formerly state-run company, was detained by police for questioning on Tuesday over allegations that the company’s employees illegally donated corporate funds to lawmakers. The KT chairman was interrogated for roughly 20 hours before he was returned home at 6 a.m. Wednesday.

KT leaders often followed the same path as Posco CEOs, and changed when administrations switched. Hwang was first appointed chairman in 2014 and secured another three-year term in 2017.

Some critics say the investigation of Hwang could have put pressure on Kwon to leave Posco.