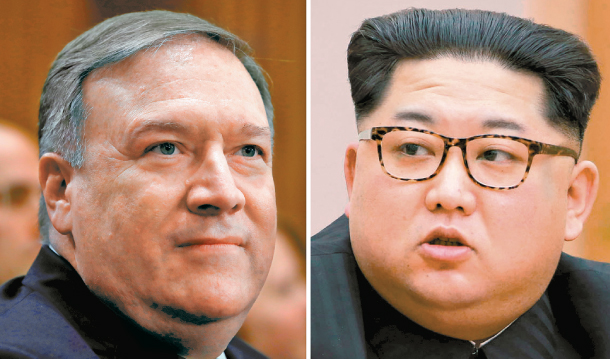 Mike Pompeo, the Central Intelligence Agency director and secretary of state nominee, made a clandestine visit to North Korea at the beginning of April to meet with leader Kim Jong-un on behalf of U.S. President Donald Trump, according to reports.

The Washington Post first reported on Wednesday, citing two people with direct knowledge of the trip, that Pompeo’s top-secret visit was part of an effort to lay the groundwork for direct talks between Trump and Kim about North Korea’s nuclear weapons program. CNN reported that Pompeo was only accompanied by intelligence officials on the Easter weekend trip, which fell on March 31 and April 1, with no White House or State Department officials.

This marks the highest-level meeting between Washington and Pyongyang in nearly 18 years. Then-U.S. Secretary of State Madeleine Albright flew to Pyongyang in October 2000 to meet with late North Korean leader Kim Jong-il, father of Kim Jong-un, to pave the way for a visit by President Bill Clinton, but the meeting never happened.

Trump confirmed Pompeo’s meeting with Kim through a tweet later Wednesday, stating: “Mike Pompeo met with Kim Jong Un in North Korea last week. Meeting went very smoothly and a good relationship was formed. Details of Summit are being worked out now. Denuclearization will be a great thing for World, but also for North Korea!”

Kim Jong-un also made a surprise visit to Beijing the week before Pompeo’s arrival, from March 25 to 27, to hold talks with Chinese President Xi Jinping. That was the young North Korean leader’s first visit to a foreign country since he assumed office in December 2011.

Xi is also preparing to make his first visit as president to Pyongyang “soon,” an official with knowledge of the discussions told CNN Wednesday, possibly after the North-U.S. summit.

Trump told reporters Tuesday that the United States had “direct talks at very high levels, extremely high levels, with North Korea,” without further elaborating. “I really believe there’s a lot of goodwill. We’ll see what happens, as I always say. Because ultimately it’s the end result that counts.”

He also said that there are “five different locations” being considered for what would be a historic U.S.-North summit.

Some venues mentioned have been Geneva and locations in Northeast and Southeast Asia, a person familiar with the talks told Bloomberg News, who adding that Washington wasn’t considering Beijing, Pyongyang, Seoul or the truce village of Panmunjom at the inter-Korean border.

Last week, Trump said that he would hold talks with the North Korean leader sometime in May or early June. On March 8, Trump accepted Kim’s invitation to a first U.S.-North summit. Kim conveyed through South Korean envoy Chung Eui-yong, the Blue House national security adviser, that he is committed to denuclearization. Last month, Trump replaced both his secretary of state and national security adviser, but contact between Washington and Pyongyang was reported to have been underway through intelligence and diplomatic channels.

“North Korea is coming along,” said Trump, speaking at his Mar-a-Lago resort in Florida on Tuesday ahead of a summit with Japanese Prime Minister Shinzo Abe. “South Korea is meeting, and has plans to meet, with North Korea to see if they can end the war. And they have my blessing on that.”

He added, “People don’t realize the Korean War has not ended. It’s going on right now. And they are discussing an end to the war,” referring to the three-year Korean War, which ended in 1953 with an armistice agreement. “So, subject to a deal, they would certainly have my blessing.”

Trump again confirmed that the meeting with North Korean leader Kim “will be taking place probably in early June or a little before that - assuming things go well.”

But he also added, “It’s possible things won’t go well and we won’t have the meetings, and we’ll just continue to go along this very strong path that we’ve taken.”

Trump made the remarks ahead of next week’s inter-Korean summit between the South’s President Moon Jae-in and the North’s Kim scheduled for April 27 at Panmunjom.

He said that South Korea has “been very generous that without us” the inter-Korean meeting would not have happened, and also credited himself for the “great success” of the PyeongChang Winter Olympics in February.

Abe was in the United States for a two-day meeting with Trump, where cooperation on North Korea was expected to be a key topic of discussion.

Sarah Huckabee Sanders, White House press secretary, told reporters, “The president said the administration has had talks at the highest levels and added that they were not with him directly.”

“It is not appropriate for us to confirm secretary of state nominee Pompeo’s visit to North Korea,” a Blue House official in Seoul said Wednesday. “However, South Korea and the United States are sharing all information and are closely in discussion.”

Pompeo last week clarified that he does not expect a comprehensive deal to be reached in a single meeting between Trump and Kim, but that the aim would be to walk away with an agreement in which Pyongyang “will step away from its efforts to hold America at risk with nuclear weapons.”

“No one is under any illusions we’ll reach a comprehensive agreement through the president’s meeting,” said Pompeo, who is considered to be more hard-line than predecessor Rex Tillerson, during his confirmation hearing to become top U.S. diplomat.

But Pompeo told the Senate Foreign Relations Committee on April 12 he is “optimistic” Trump and Kim could discuss denuclearization and pave the way to “achieving a diplomatic outcome” that “America and the world so desperately need.”

“It is my full anticipation that however that meeting goes, there will be enormous diplomatic work yet remaining,” said Pompeo. “We have not yet exhausted our capacity there,” adding there is an “awfully long way to go” in terms of diplomatic options.

When asked by a senator whether he leans toward Bolton’s argument for striking North Korea first, or with Defense Secretary Jim Mattis’ statement that war with North Korea would be catastrophic, Pompeo responded, “I lean more closely to the president’s view, which is to continue the pressure campaign, to build a diplomatic coalition around the world, to put pressure on Kim Jong-un such that we can achieve the United States’ goals without ever having to put one of our young men or women in harm’s way.”