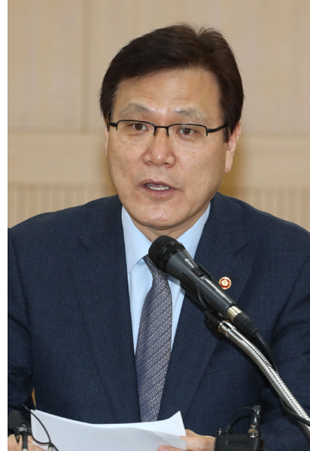 Choi Jong-ku, chairman of the Financial Services Commission, suggested on Monday that Samsung Life Insurance sell the vast majority of its 27.6 trillion won ($25.7 billion) worth of shares in Samsung Electronics before it is forced to do so by a proposed amendment to insurance law.

“Before the law comes into effect, I hope Samsung Life Insurance will bring up alternatives in a voluntary and gradual manner,” he said.

Choi was referring to a pending amendment aimed at reducing the amount of shares that an insurance company can hold in an affiliate.

Currently, an insurance company is only permitted to invest a maximum of 3 percent of its assets in an affiliate, based on the acquisition cost. The reform will change the price standard from the acquisition cost to the current market price, a system currently used for banking and securities companies.

Samsung Life Insurance’s 8.23 percent stake in Samsung Electronics is permitted under the current law because it cost around 569 billion won at the time of acquisition, less than 3 percent of the company’s net assets. But when the holding is converted to the current market value, it balloons to 27.6 trillion won as of Monday, which goes well past the 3 percent limit set at 8.5 trillion won.

Choi upped the ante in a meeting on Friday when he vowed to speed up financial reform.

“The issue of financial companies’ stake ownership in their affiliates should be addressed by taking into account the interests of different parties, including minority shareholders and the market impact,” he said.

Members of the ruling Democratic Party oppose cross-shareholding ownership since it allows corporate owners to make transactions to increase their influence.

The chairman also touched on an erroneous trading error at Samsung Securities.

He said that the regulator will hold those involved in the case accountable and revamp internal equity trading systems across the board after the investigation result is released by the Financial Supervisory Service.

He called for the swift implementation of ongoing reform measures including the stewardship code and strengthening of oversight of conglomerates with financial affiliates.