Moon-Trump summit planned for May

Moon-Trump summit planned for May 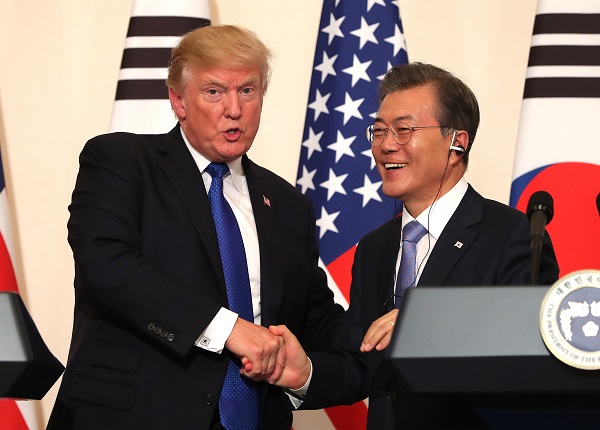 A summit between President Moon Jae-in and U.S. President Donald Trump will be held between the inter-Korean summit tomorrow and a yet-to-be-scheduled North-U.S. summit in late May or June, according to a senior Blue House official Wednesday.

Speaking on the condition of anonymity, the official said the Moon-Trump meeting was expected to be held sometime in mid-May, without elaborating on a date or venue.

The official’s remark confirmed widespread speculation that the leaders of South Korea and the United States will meet after the inter-Korean meeting to coordinate an agenda for Trump’s meeting with North Korean leader Kim Jong-un.

“We should continue closely coordinating [with Washington] to successfully hold the North-U.S. summit,” the official told reporters.

During his meeting with Trump, which is likely to be held in Washington, Moon will share what he and Kim agreed to in detail and any demands Kim might make of the United States in return for giving up his nuclear weapons and long-range missiles.

The Blue House has defined its role in resolving the North’s nuclear issue as a “mediator” that tries to narrow gaps in the positions of Pyongyang and Washington.

“Moon’s meeting with Trump will signify the beginning of the so-called Moon-Kim-Trump process in which the three take part in joint efforts for the North’s denuclearization,” said Koh Yu-hwan, a professor of North Korean studies at Dongguk University. Koh noted that Moon’s meeting with Trump would focus on “producing a joint strategy” for the Kim-Trump meeting as well as sharing the outcome of the Moon-Kim summit.

Seoul and Washington have been in close consultation as the geopolitical environment evolved rapidly in recent weeks with the high stakes inter-Korean meeting tomorrow and a summit between Kim and Trump.

To better coordinate policy moves ahead of the two summits, Chung Eui-yong, head of the Blue House’s National Security Office, met with his U.S. counterpart John Bolton in Washington on Tuesday.

“The meeting with Bolton was very productive and beneficial. South Korea and the United States agreed to continue close coordination following the inter-Korean summit for the success of the North-U.S. summit,” Chung was quoted as saying by Yoon.

Moon’s view of Washington’s central role in Korean affairs was reflected in a phone conversation with Japanese Prime Minister Shinzo Abe on Tuesday, in which he said that declaring an end to the Korean War “at least required a consensus among South and North Korea and the United States.”