The Olympics’ role in peace talks

The Olympics’ role in peace talks

Thomas Bach
*The author is the president of the International Olympic Committee. 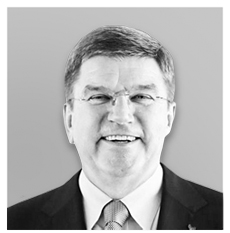 When the leaders of North and South Korea meet today, it will be only the third such summit since the end of the Korean War. Such moments of hope are rare in our increasingly polarized world. Indeed, it was only a few months ago that political tensions were escalating rapidly and even military confrontation on the Korean Peninsula looked likely. It was this dramatic crisis situation of missile launches, nuclear tests and bellicose rhetoric that the world and the 2018 PyeongChang Winter Olympic Games were facing in the autumn of 2017. To explain the easing of these tensions, it is useful to consider the role of the Olympic Games in this positive development.

International relations are often said to be all about sober realpolitik. So it may have come as a surprise to some that it was the power of sport that provided the opening for North and South Korea to consider dialogue rather than confrontation.

The historic moment of the Olympic Winter Games PyeongChang 2018 was when the athletes from North and South Korea marched together as one team at the opening ceremony, behind one flag, the Korean Unification Flag. This moment, of course, did not happen by chance. It was the result of a long process of negotiations and high-level government engagement that the International Olympic Committee (IOC) began back in 2014.

That year, the IOC started a special program to support North Korean athletes to qualify for the PyeongChang Olympics. But political tensions on the Korean Peninsula escalated significantly during the second half of 2017. A North Korean nuclear test and missile launches, followed by countermeasures, including sanctions by the United States and the United Nations, called into question whether the Olympic Winter Games on the Korean Peninsula could take place at all. The IOC intensified its diplomatic efforts with all sides, always maintaining strict political neutrality and stressing the fundamental mission of the Olympics to bring all people together in peaceful competition.

A major part of the IOC’s efforts in this regard were focused on the Olympic Truce resolution at the United Nations. The idea behind the Olympic Truce, a 3,000-year old tradition revived by the IOC and the UN, is to call for a halt to hostilities in the world during the period of the Olympic Games. Given the crisis situation on the Korean Peninsula, the IOC, together with the government of South Korea, incorporated a special section in the resolution to ensure the safe passage of all participants for the Games. After all these joint efforts, the resolution was co-sponsored by a record number of UN member states and adopted by consensus by the UN General Assembly in November 2017.

During all of this time, the IOC kept the door open on the sporting side for the participation of North Korean athletes at PyeongChang. We did so by extending deadlines, assuring them of special invitations, and continuing our support program for the athletes. In this way, all the parties knew that they could count on the IOC to keep the door for participation at PyeongChang open. The IOC was very happy to see both Korean governments walk through this door, following the new year’s address of the leader of North Korea.

Right after this, the IOC initiated the “Olympic Korean Peninsula Declaration” in a meeting on Jan. 20 with both governments and the two National Olympic Committees. With this declaration, the IOC made possible not only the participation of North Korean athletes at PyeongChang, but also the joint march behind one flag at the Opening Ceremony, as well as the formation of a unified women’s ice hockey team.

Cynics may decry these decisions as naïve. If such naivete can now lead to the peace negotiations today, then I am happy to be labelled naïve. Other critics may say this was just political propaganda. To them I say that if these Olympic decisions contribute to peace negotiations, I welcome even more of this. When Pierre de Coubertin revived the modern Olympic Games over 100 years ago, his idea that sport could bring together all people in peaceful competition was also seen by many as a naïve idea in an age of nationalism. But if the Olympic Games can still bring together rivals and enemies in 2018, it seems that, well over a century later, this naïve idea continues to have much compelling power in today’s world.

Based on my personal impressions, having met both leaders from North and South Korea recently, there are some grounds for cautious optimism for the talks today. In my meeting with the North Korean leader, he said: “The once frozen north-south relations greeted a dramatic thawing season with the Olympics as a momentum and it was totally attributable to the efforts of the IOC which offered an opportunity and paved a path for it.” He also confirmed North Korea’s commitment to participating in the next editions of the Olympic Games. For his part, the South Korean leader always supported the participation of North Korea at PyeongChang because he saw the Olympic Winter Games as a chance to pause the spiral of confrontation and shift the momentum toward peace.

The Olympic Games have opened the door. The politicians have taken the first steps to walk through this door. Past the doorstep, they are now about to sit down together at the same table and talk peace. They enter these talks with the shared successful Olympic experience of PyeongChang. After my meetings with both leaders from North and South Korea, I am confident that both are determined to build on this Olympic momentum.