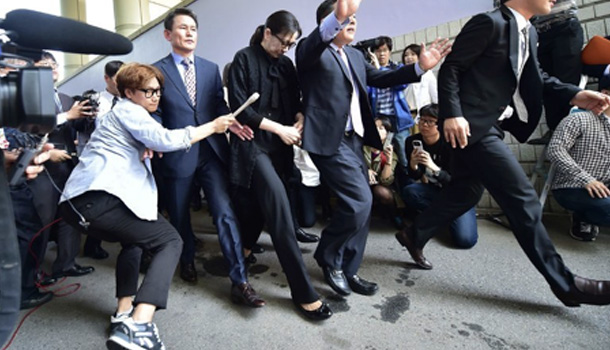 Two sisters accused of abusing Korean Air employees will be removed from management positions in their family-run corporate empire, the company announced on Sunday, four years after one of them became notorious for an episode of “nut rage.”

The executives, Cho Hyun-ah, 43, and Cho Hyun-min, 35, have become lightning rods for South Koreans who say that leaders of the family-run conglomerates known as chaebol, which dominate the country’s economy, often act as though they are above the law.

Cho Hyun-ah became infamous in 2014 when, as a Korean Air vice president, she flew into a rage after she was served macadamia nuts in an unopened package, rather than on a plate, in first class. Officials said she threw documents and insults at members of the flight crew and ordered flight attendants to kneel and beg for forgiveness.

Ms. Cho then ordered the Korean Air plane back to its gate at Kennedy International Airport in New York so that she could have the chief flight attendant removed.

She was later accused of violating airline safety laws and spent several months in prison, though she recently made a quiet return to the Hanjin conglomerate for which her father, Cho Yang-ho, is chairman, managing a hotel business that he controls.

This month, the police began investigating accusations of physical abuse against her younger sister, Cho Hyun-min, a Korean Air marketing executive. She was accused of insulting an advertising executive and hurling water in his face during a business meeting.

Ms. Cho said she had thrown the water on the floor, not at the official’s face, but nevertheless apologized for what she called foolish and reckless behavior.

But the family’s trouble did not end there.

The local news website OhmyNews released what it described as an audio recording of her screaming at Korean Air officials. Korean Air whistle-blowers have also accused the Cho family of illegally bringing in luxury items from abroad, disguising them as company goods to avoid tariffs and to save transport expenses.

The police and customs investigators raided the offices and homes of the Cho family this month to collect evidence.

The family has become so vilified among South Koreans that people have petitioned to the office of President Moon Jae-in to ban Korean Air from using “Korean” in its name.

Mr. Cho, the company chairman, apologized in a statement on Sunday: “I am deeply sorry that problems connected to my family have worried the people and employees of Korean Air,” he said. “As chairman of Korean Air and as the head of my family, I feel crushed by the immature behavior of my daughters.”

He said they would be immediately removed from management. Mr. Cho also said he would introduce professional managers to top company posts. His son, Cho Won-tae, remained as president of Korean Air.

South Korea’s wealthy families have developed reputations over the years for running their corporate empires like fiefs. The families have also become entangled in several corruption scandals and feuds. But the chaebol continue to endure, critics say, because they are crucial to the country’s economy.

This article discusses the irrational behavior that erupted when two daughters of the corporate owner of Korean Air were appointed to positions of power which they abused by publicly aggressing against Korean Air employees. Their father finally removed them from their positions, promising to appoint professionals in their stead.

Research three top privately-owned corporations and analyze their top-level of management. Are there any family members appointed to positions of power and have they caused similar public problems?