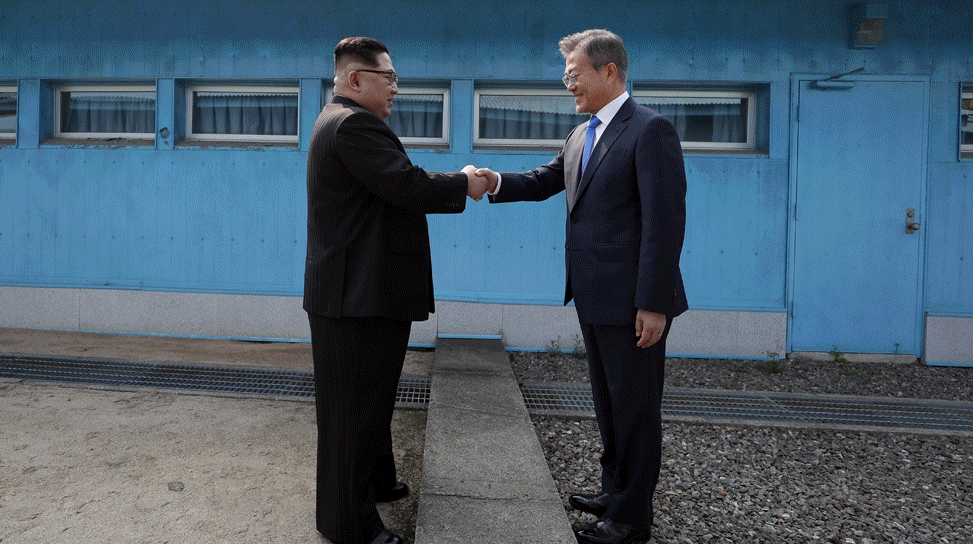 South Korean President Moon Jae-in was waiting at the military demarcation line (MDL) bisecting Panmunjom. Kim and Moon shook hands with the MDL between them.

“It’s a pleasure to meet you,” said Moon.

“Indeed, I’m so filled with excitement because of the meeting at this historic site,” Kim replied. “And I was truly moved that you have come all the way to receive me at the military demarcation line at Panmunjom.”

Moon praised Kim’s “bold and courageous decision” to attend the summit, noting they “made a historic moment.”

Kim crossed the MDL and the two men shook hands for the photographers. Kim then invited Moon to step back across the MDL with him and spend a moment on North Korean soil.

The scene of the two leaders shaking hands and smiling had the entire world watching, intent on catching every eye and physical contact between Moon and Kim, who are 31 years apart in age.

Over 2,850 local and foreign journalists are covering the event, most of whom are based in the press center inside Kintex, a convention center in Goyang, Gyeonggi.

The scene of the two leaders standing together in South Korean territory marked a dramatic turnaround from the tensions of last year, when many feared that vitriolic exchanges between Kim and U.S. President Donald Trump could lead to actual war.

The delegates accompanying Kim Jong-un included Kim Yo-jong, his younger sister, who made a three-day visit to South Korea in February.

Escorted by Moon, Kim walked toward an honor guard from the South Korean military, against which his grandfather Kim Il Sung fought between 1950 and 1953 to put the entire Korean Peninsula under his communist rule.

The war ended in an armistice, not with a peace treaty, leaving the two Koreas technically at war. It was the first time for a North Korean leader to review a South Korean honor guard.

Formally ending the war with something like a peace treaty is one of the issues Moon and Kim will discuss today, on top of the denuclearization of North Korea, the most important item on the agenda.

After reviewing the honor guard, the two leaders greeted delegation members from each side before entering Peace House for a first round of talks.

Kim Jong-un wrote in a guestbook, “A new history is from now. An era of peace, the starting point of history,” along with his name and the date, April 27, 2018.

For the talks, Kim sat with two of his delegates: his sister Kim Yo-jong to his left and Kim Yong-chol, vice chairman of the Central Committee of the Workers’ Party and director of the committee’s United Front Department, to his right.

Moon, sitting across an oval table from Kim, was flanked by Suh Hoon, head of the National Intelligence Service, and Im Jong-seok, his chief of staff.

“Let’s talk candidly today and make good results — not results like the last time when we didn’t achieve them and went back to square one,” he added, calling the meeting an opportunity to look forward.

“I hereby say in front of President Moon Jae-in and to the reporters here that we will have a good talk — necessary talks — to make good results.”

In reply, Moon said, “The entire world’s eyes and ears are focused on Panmunjom. The people of South and North Korea, and Koreans living abroad, hold very high expectations, which is why I think both our shoulders feel the weight.”

Recalling the moment Kim made the historic crossing over the MDL, Moon said, “The moment Chairman Kim Jong-un crossed the military demarcation line for the first time, Panmunjom became a symbol of peace, not a symbol of an armistice.”

He expressed high hopes for the meeting. “We have all the time today to talk. Let’s talk about everything we haven’t talked about over the last 10 years.”

The meeting was not without some candid talk and jokes, especially by Kim.

“The talk of the town seems to be what we’re having for dinner tonight,” Kim said in his opening speech, provoking laughs. “I brought some Pyongyang cold noodles for you to taste tonight.”

He continued, “The noodles have come from afar.” He stopped himself and turned to his sister to say, “Oh perhaps we shouldn’t use the word ‘far’ [to describe the distance between the two countries] in this case, eh?”

According to the Blue House, Kim even made a joke about missiles in the introductory meeting before the official summit dialogue.

“Kim said, ‘I heard that, Mr. President, you have not been able to sleep much lately because of National Security Council meetings set up because of us,’” Yoon Young-chan, senior presidential secretary for public affairs, told the press.

Though the talk was sometimes light, Kim and his entourage showed extreme care about his safety and security during the visit.

Before Kim sat on a chair in the lobby on the first floor of Peace House to sign the guestbook, two of his security officials stepped forward to spray the chair with disinfectant and water and wipe it with a cloth.

They also sprayed disinfectant on the guestbook.

“Both sides had a serious and frank discussion about the denuclearization of the Koran Peninsula, the establishment of a permanent peace and ways to improve inter-Korean relations [during the first round of talks],” said Yoon, the senior presidential secretary for public affairs.
In the afternoon, the two sides were to continue drafting a joint declaration.

Ri Sol-ju, the wife of Kim Jong-un, will join her husband by 6:15 p.m. in Panmunjom, Yoon said, and have a brief chat with Moon and his wife Kim Jung-sook at the Peace House before joining the dinner banquet.