1. The opening ceremony of the 4th Royal Culture Festival was held Saturday in Gwanghwamun, central Seoul. 2. The famous Moonlight Tour around Changdeok Palace will be held during the festival, starting at 7:40 p.m. for three days from May 3.

Back in the Joseon Dynasty (1392-1910), whenever the country was hosting a grand festival, a large stage structure that looks like a mountain, known as a sandae, was set up in front of Gwanghwamun in central Seoul. It is said that most of the performances for palace-organized festivals were held in front of this backdrop, including the Buddhist festival known as Palgwanhoe as well as the Lotus Lantern Festival. The diverse forms of performance such as mask dances, plays, acrobatics and more staged in front of sandae were all together called sandaehui. 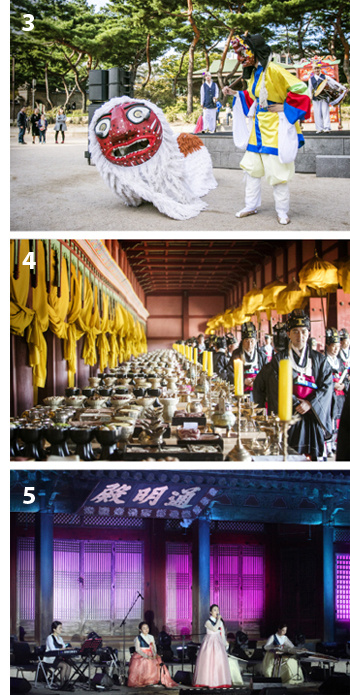 3.The Diplomatic Reception for Envoys to the Korean Empire will be performed at Deoksu Palace. 4. The Royal Ancestral Ritual will be held at Jongmyo Shrine on May 6. 5. A Traditional Korean performance will be held every evening at 7:10 p.m. until May 5 at Changgyeong Palace.

Records show that the sandae that were set up at the time were so large that one king had to limit its height to be less than 18 meters (59 feet). The larger ones were said to have measured up to 30 meters. However, after the Japanese invasion of Korea, the tradition diminished and eventually King Jeongjo (1752-1800) officially ordered its abolition in 1784.

The traditional stage structure has made a come back in Gwanghwamun for the first time in 234 years, for the 4th Royal Culture Festival, which kicked off on Saturday. Traditional performances and media art shows were held on Saturday evening in front of the sandae installed in Gwanghwamun, signaling the start of this year’s festival titled, “Today, We Meet the Palace.” Organized by the Korea Cultural Heritage Foundation and hosted by the Cultural Heritage Administration, this annual festival attempts to allow Koreans and foreigners visiting Korea a chance to learn about the royal culture of Korea and bring Korean heritage closer to the people.

“The origin of sandae dates back to the Unified Silla period (676-935) and it was actively used during the Joseon Dynasty,” said Ahn Tae-kyung, director of the festival. “I guess we can say that sandaehui was the greatest art form of the Joseon Dynasty that had fused multiple performing arts genres together.”

According to Ahn, although sandae festivals were organized by the palace, it included and welcomed the cultures, customs and the people of rural villages across the country.

From today until May 5, a sandaehui performance titled “Blooming Gwanghwamun” will be held twice a day - at 11 a.m. and 3 p.m. - at the Heungnyemun Square inside Gyeongbok Palace. As this year marks the 600th anniversary of King Sejong’s ascendency to the throne, the programs of this year’s festival put special focus on the king who invented the Korean writing system known as hangul in the mid-15th century.

According to the organizers, most of the 34 programs during the nine-day festival will be about sharing the philosophy of King Sejong and his love for the people.

A musical titled “Sejong Story-King’s Gift” will be performed at Geunjeongjeon Hall on May 5 at 2 p.m. According to director Park Jun-hyeok, it is a high-tech musical that will use the latest technologies to tell the story of King Sejong, focusing more on his achievements in the areas of science, technology and art. It was the love for his people that led him to achieve such accomplishments during his reign, said Park and the musical will show just that.

The famous Moonlight Tour around Changdeok Palace will be held during the festival, starting at 7:40 p.m. on May 3. The palace is a Unesco World Cultural Heritage site and Koreans and foreigners alike every year scramble to get tickets to the tour, where they can enjoy unique aesthetics and architecture under the moonlight. According to organizers, the upcoming moonlight tour will include tours and programs that have not been shown to the public before.

A special palace concert will be held at Tongmyeongjeon Hall every evening at 7:10 p.m. until May 5. The hall is a special place in Seoul, as it is the only building from the Joseon Dynasty that is facing east.

Since the declaration of the Korean Empire in 1897, the royal family worked to extend its diplomatic ties with other countries including China and Japan, as well as the United States, France and Germany. Because Western diplomats were not familiar with Korean customs, the royal ceremony for receiving diplomats was greatly altered. During the festival, visitors to the palace will be able to see a reenactment of the diplomatic reception, which will be performed everyday at 2:30 p.m., except from May 2 to May 4.

The Joseon Dynasty was heavily influenced by Confucian ideals, and ancestral rituals were very important. Taejo Lee Seong-gye, who established the Joseon Dynasty, was said to have built a shrine to worship ancestors as his first task after relocating the capital to Hanyang, the former name of Seoul. The royal ancestral ritual is known to be one of the most magnificent and grand royal ceremonies that combines song, dance and a parade. The performance of this ritual will take place at the Jongmyo Shrine from 10 a.m. to 4 p.m. on May 6.

For more information about the festival and more programs, visit http://www.royalculturefestival.org. Tickets to some of the programs can be purchased at ticket.auction.co.kr.