A night of drinking leads to the pennant

A night of drinking leads to the pennant 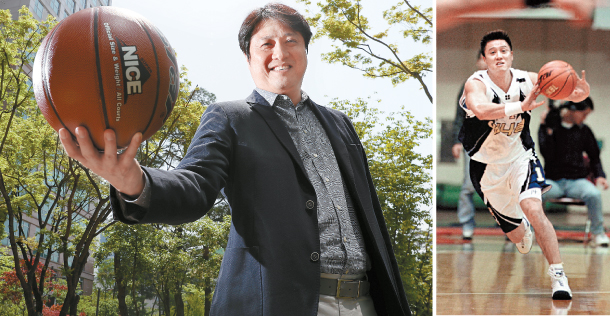 Left: Moon Kyung-eun, head coach of the Seoul SK Knights, poses with a basketball at a park in central Seoul on April 25. Above: A photo of Moon Kyung-eun from 2001, when he played for the Seoul Samsung Thunders. [WOO SANG-JO, JOONGANG PHOTO]

For Moon Kyung-eun, head coach of the Seoul SK Knights, the team’s championship victory last month was seven years in the making. 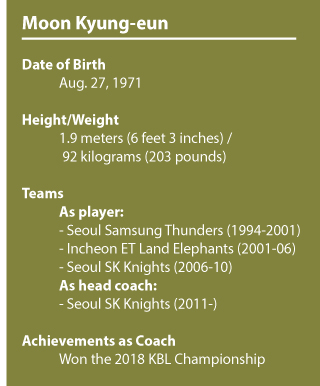 When Moon took over the team in 2011, the Knights had not won the championship since 2000. At the time, there were doubts about his ability. Moon was already a familiar name among Korean basketball fans. He was a star player during his college years at Yonsei University and professionally in the Korean Basketball League, but the conventional wisdom at the time held that a great player could not be a great coach.

The stereotype seemed to hold true. The Knights continued to struggle getting a win under his helm, but Moon blocked out the criticism and kept his focus on the team. His efforts paid off this season when the Knights made the championships, but after losing the first two games, it seemed as if the team would finish runner-up again.

Determined not to throw away his shot, he invited Choi Bu-kyung and Choi Won-hyuk, the Knights’ two best defensive players, for a drink. Together, they discussed their most formidable opponent: Deonte Burton of the rival Wonju Dongbu Promy.

On the court, Burton played relentless offense. He was responsible for scoring most of the Promy’s points, so much so that opposing teams often draw strategies around him. While listening to Moon’s concerns, Choi Won-hyuk told his coach, “Leave [Burton] to me. I can’t promise that I’ll block him, but I can try my best to annoy him throughout the game.”

Until the playoffs, Choi was considered the Knights’ sixth man, a bench player who was on court an average of 6 minutes and 26 seconds per game during the season, but this time, Moon couldn’t afford to ignore his input. At Choi’s request, the coach increased his playing time and allowed him take care of Burton.

Choi responded to Moon’s trust in earnest, blocking Burton as much as he could. The tactic seemed to work. During the third championship game, Burton’s scoring dropped to 25 points, and by the last game, he managed to only score 14 points. The Knights were able to redeem themselves and take home the KBL Championship trophy for the first time in 18 years.

After the win, Moon cited the drink he had with Choi Won-hyuk was the key to the team’s victory.

The Knights’ victory was a cathartic moment for the coach, who last saw a championship win when he was a player for the Seoul Samsung Thunders in 2001. Moon could be seen crying along with his players as they carried the trophy. It lifted all the pressure he had as a player-turned-coach.

“There was a strong bias that a star player couldn’t succeed as a coach,” Moon said, “and the process of ignoring such judgement wasn’t easy.”

Throughout Moon’s seven years as the Knights’ head coach, he had been known for his big brother-like leadership. Moon said the key to building such leadership was “trust.”

“An instructor has to trust his players,” Moon said. “But the more important thing is to make the players believe their head coach and have them follow along.”

To gain his players’ trust, Moon talked with them as much as possible. He would try his best to fulfill their suggestions about managing the team to show his players that he respected their opinions.

“As I coach through more seasons, there are more days when I stay up all night trying to analyze the other teams,” Moon said. “During the championship series, I’ve been looking through [the Promy’s] statistics every night.”

From those nights of strategizing, Moon decided to reduce captain Kim Sun-hyung’s playing time in the first three quarters of the game, allowing him to score more during the fourth quarter.

“At one point in the game, we were 20 points behind, but Coach didn’t change his plan,” Kim said. “And when we overcame the big deficit and won the game, my trust toward the head coach grew stronger and I thought that if we do whatever Coach tells us to do, it’ll work.”

Until the third quarter of the third championship game, Kim didn’t score a point, but in the fourth and overtime, Kim scored 11 points and four points to lead the team to a big come-from-behind victory.

“This season made it clear as to where Moon Kyung-eun’s basketball is heading,” Moon said. “Next season, we’ll try to make the game more exciting and bring back excitement to the league.”