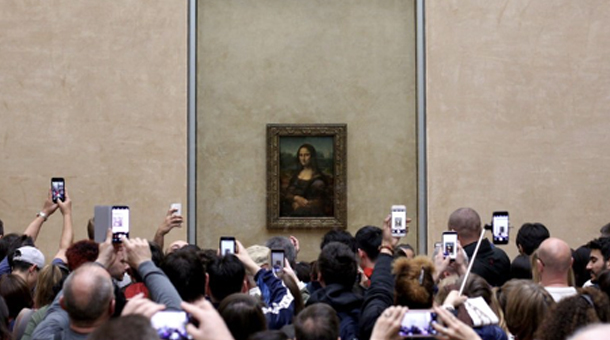 The young couple moved to the front of the crowd to look at the painting. After a few seconds, the woman turned around, smiled into her cellphone and took some selfies. Next, she handed her device to her husband, who took more formal shots of her in front of the work. The two then posed arm in arm for selfies together, turned to have a last brief look at the painting — and moved away.

“It’s too small, and it’s too crowded to get close to look at the detail,” said the woman, Jeannie Li, 28, a financial analyst in Shanghai, unimpressed by her first sight of Leonardo da Vinci’s “Mona Lisa.” “I can see it better in a book or on the internet.”

The way the couple interacted with the 500-year-old painting exemplifies how differently the digital generation experiences art. Most of the roughly 150 people crowded around the painting at the Louvre were taking photographs of the piece, or of themselves in front of it. In the presence of the “Mona Lisa,” digital photography, more than looking at the actual artwork, has become the primary experience.

Ms. Li and her husband, Steven, were in Paris for their honeymoon. Why had she wanted to visit the Louvre and see this particular artwork? “Because it’s famous, because of its mysterious smile, and because I read ‘The Da Vinci Code,’ ” Ms. Li said, referring to the best-selling novel by Dan Brown, which opens with the shooting of a curator in the museum’s Grand Gallery.

In 2017, the Louvre attracted 8.1 million visitors, retaining its long-held status as the world’s most visited museum. Leonardo’s enigmatic, infinitely reproduced portrait of a woman thought to be Lisa Gherardini, the wife of a Florentine cloth merchant, is the star attraction. Made in oil on wood in the early 16th century, the painting is presented in a temperature-controlled capsule behind bulletproof glass and a protective barrier.

In October 2014, the American megastars Jay-Z and Beyoncé, and their daughter Blue Ivy, had the privilege of visiting the Louvre on their own. The resulting smartphone photo session drew huge attention on Instagram, prompting Buzzfeed to declare: “No Picture Matters More Than Beyoncé And Jay-Z Posing In Front Of The Mona Lisa,” and adding, “It might very well be the best picture of our generation. Or any generation.”

It would be easy enough for a critic or curator to dismiss the “Mona Lisa experience” as nothing more than selfie tourism. Yet Jay-Z and Beyoncé, like pretty much everyone who visits the Louvre, did actually look at the painting.

The way the “Mona Lisa” is viewed is, in fact, soberingly representative of the way most art is viewed in today’s saturated, digitally mediated, visual culture. How many more (or fewer) seconds do cellphone-wielding visitors spend looking at individual works at a commercial art fair or exhibition than at the Louvre? How is an artistic reputation made these days, other than through Instagram?

“She is older than the rocks among which she sits; like the vampire, she has been dead many times, and learned the secrets of the grave,” the British critic Walter Pater wrote in 1873, evoking the timelessness of the “Mona Lisa” long before the advent of mass tourism, mobile phones, apps and fragmented attention spans.

Mr. Pater’s much-quoted description of “La Giaconda” (as the painting is also known) is redolent of a culture in which a privileged few would spend hours with masterpieces to try to divine their profoundest meanings.

But mechanical — and digital — reproduction has changed things. Another British critic, John Berger, wrote in his influential 1972 book, “Ways of Seeing,” that in an age of digital reproduction, “the meaning of paintings is no longer attached to them; their meaning becomes transmittable.”

Similarly, a wealthy art collector does not need to spend hours in front of a Christopher Wool, Rudolf Stingel or Gerhard Richter abstract freshly purchased for a few million dollars. The collector knows exactly what it looks like, having already seen the image many times in digital reproduction.

While the instantly recognizable quality of brand-name contemporary art reassures collectors — and by extension bolsters the pieces’ value — other works can be diminished by their reproducibility. The “Mona Lisa” is a prime example.

“It’s very underwhelming. It’s small and dark,” Katie Qian, 33, an engineer from Salt Lake City, said after seeing the “Mona Lisa” for the second time in her life.

Christie’s, by contrast, offered viewers a quasi-religious experience at the pre-auction viewing of the much-restored panel painting “Salvator Mundi,” which had recently, not incontrovertibly, been re-attributed to Leonardo. The auction house, with the help of the advertising agency Droga5, promoted what it called “The Last da Vinci” with a video of people moved to tears by the painting. It went on to sell for an all-time high of $450.3 million.

“The bogus religiosity which now surrounds original works of art,” Mr. Berger wrote in “Ways of Seeing,” “is ultimately dependent on their market value” and “has become the substitute for what paintings lost when the camera made them reproducible.”

Back at the Louvre, the millions of visitors who trudge through the Grand Gallery every year on their way to the “Mona Lisa” tend to walk straight past “The Virgin of the Rocks,” a fully documented Leonardo masterpiece from the early 1480s. Then again, perhaps not many tourists are aware that it is a painting that, in the unlikely event of it ever appearing on the market, would also sell for hundreds of millions of dollars.

“At least millions of people want to see it,” said Dulce Leite, 63, an Italian who seemed amazed by the throng in front of the “Mona Lisa.” She had spent the previous 15 minutes contemplating a crowd-free “Virgin of the Rocks” (without taking any photos).

“Now they look at the picture and there’s the possibility of taking a photo and posting it,” she added. “We had to see it and memorize.”

Imprisoned by its reputation as the most famous painting in the world, and by its security capsule, the “Mona Lisa” has, to all meaningful intents and purposes, ceased to exist as an original work of art. It has become an idea — and a photo opportunity.

What could be a more contemporary way of seeing?

This article discusses the manner in which millions visit the Louvre every year especially to see its most prized possession, the Mona Lisa painting by Leonardo da Vinci, only to briefly take a picture with their smartphones to then quickly move on. When asked about their experience, many state that they were underwhelmed by the actual painting: it appears that the act of going to see the painting and taking a selfie with it in the background has replaced viewing the long-lasting public ritual of seeing and studying it.

Scholars have argued that social media has dramatically changed many other public rituals, such as reading hard copies of books or newspapers. Compare and contrast these practices with going to a museum to view a painting. What are the similarities and differences?