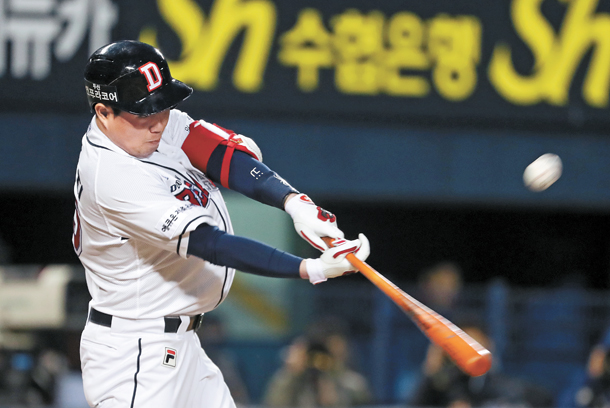 Yang Eui-ji swings during the Bears’ game against the KT Wiz. [NEWS1]

The Doosan Bears were not looking promising going into the 2018 season. After failing to win the championship last year the Seoul team lost a number of key players in the offseason and failed to make any meaningful additions to the roster. Korea’s not a betting country, but if it were, very few pundits would have been willing to put money on the Bears. 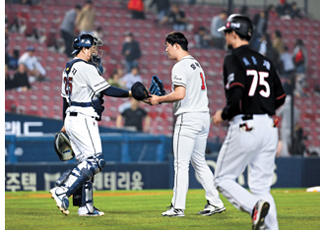 Yang Eui-ji, left, celebrates with Ham Deok-ju after winning a game against the KT Wiz at Jamsil Baseball Stadium in southern Seoul on May 1. [YONHAP]

But the Jamsil club had other ideas. Falling back on a tried and true lineup of reliable batters, the Bears have proven this season that experience and training trumps a shopping spree. At the core of Doosan’s veteran lineup is catcher Yang Eui-ji.

As a seasoned catcher, Yang plays a crucial role in helping the young pitchers stay focused on their game. But it’s in the batter’s box, not behind it, that Yang has really come into his own this year, ranking second in the league’s batting average as of Sunday’s game. Yang’s batting average is 0.393 and he ranks 20th in home runs, at six, and 22nd in RBIs, at 23.

This season, the Bears’ bullpen consists of young pitchers - Ham Deok-ju, Lee Young-ha, Park Chi-guk and Gwak Been. Though the fans were concerned about the Bears’ bullpen, Yang has made sure the pitchers feel at home on the mound.


“The pitchers get overwhelmed when I tell them what to do at first,” Yang said. “I tend to let the pitchers throw the pitch they want or the ones they are confident in.”

And with Yang behind the batter, the pitchers don’t need to worry about making mistakes. The veteran catcher hasn’t made any errors this season, dominating the league in blocks and preventing runners from stealing bases.

“I still have a long way to go to catch up with Yang Eui-ji,” said LG Twins’ catcher You Kang-nam, who is another standout catcher in the league this season. “He is outstanding in both defense and offense.”

Not only in blocks, but Yang has also shown great ability to check the physical and psychological condition of the pitchers, as the Bears’ coaching staff discuss with Yang before changing a pitcher during the game.

“One of the catcher’s roles is to figure out whether the pitcher is pitching well or not,” said Bears’ manager Kim Tae-hyung, who used to be a catcher while active in the league. “In that sense, Yang Eui-ji’s role is huge.”

Yang has a keen sense for which pitchers - and pitches - work in different situations.

“When it comes to the mix of pitchers, I tend to leave it up to Yang Eui-ji,” said Kim.

Yang may now be one of the most dominant players in the KBO, but it hasn’t all been plain sailing. In June 2017 Yang was caught by a stray pitch, injuring his finger and taking him out for a month. His return to the team wasn’t easy, and he struggled to find his old rhythm. He ended the 2017 season with a batting average of 0.2777, his lowest since the 2013 season.

Up until the fourth game of the 2017 Korean Series against the Kia Tigers, Yang wasn’t able to make a single hit.

This season didn’t get off to the most auspicious start either. Yang was criticized for unsportsmanlike conduct after for allegedly intentionally missing a catch in an attempt to hit the umpire. During the Bears’ game against the Samsung Lions on April 13, Yang got up and moved to his right rather than trying to catch Gwak Been’s warm-up pitch, leading the ball to sail between home plate umpire Jung Jong-soo’s legs. Yang was fined 3 million won ($2,779.20) and ordered to complete 80 hours of community service in youth baseball-related activities.

“[After that incident], I get along with the umpires just fine,” Yang said.

Upon completion of this season, Yang will become a free agent. Since he’s playing another great season, competition to sign the catcher is likely to be fierce.