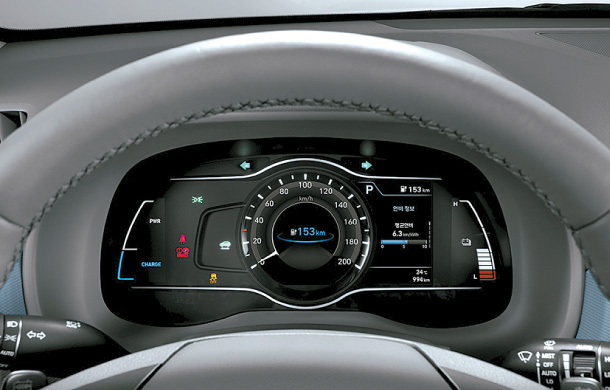 Hyundai Mobis is hoping that digital dashboards will help it stand out from the competition in the connected car era.

The largest auto parts maker in Korea said Thursday that it started mass producing 7-inch displays for digital dashboards, more properly known as instrument clusters, this month, three years after it began developing the product. On the back of its production success, Hyundai Mobis said it will speed up the development of its digital cockpit for self-driving vehicles.

The 7-inch display will first be installed in the electric version of Hyundai Motor’s small SUV Kona, which launched in Korea last month and is slated for debut in America in the latter half of this year. A digital instrument cluster provides information on speed, driving modes and fuel, as well as any alerts or emergency alarms. It is a vital component of an autonomous car because it is able to deliver a vast amount of information related to driving in a fast and effective way compared to an analogue dashboard.

Global market research firm IHS Markit predicted the global cluster industry will grow from 7.5 trillion won (6.9 billion) in 2016 to 11 trillion won in 2023. It also estimated that 81 percent of the cars sold in 2023 will include a digital instrument cluster.

Hyundai Mobis says it has the capacity to develop and manufacture four crucial infotainment elements of self-driving vehicles: heads-up displays, surround view monitoring, audio video navigation systems and digital clusters, a rare combination for other complete carmakers around the world, according to Hyundai Mobis.

“Hyundai Mobis is going to develop a comprehensive platform that is able to control the four infotainment technologies by next year’s first half to take the upper hand in the competition for a next-generation cockpit,” Yang added.