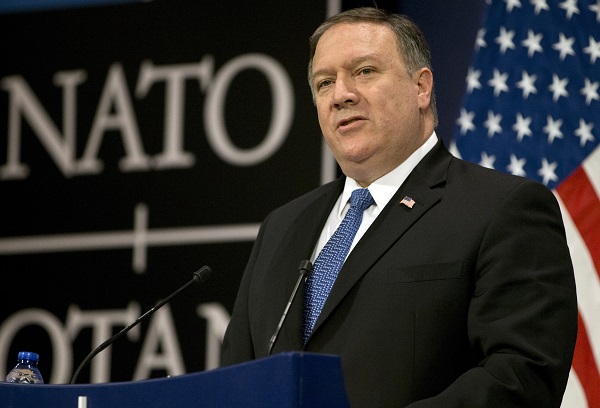 Pompeo’s visit came just 40 days after his first top-secret trip to meet Kim in Pyongyang, when he was Trump’s secretary of state nominee and director of the Central Intelligence Agency.

Pompeo flew from Japan and upon arrival headed to the Koryo Hotel for meetings with North Korean officials.

Pompeo told reporters on a plane from Yokota Air Base in Japan to Pyongyang that the purpose of his visit was “to put in place a framework for a successful summit between the two presidents.”

He said there is a “second piece” to the visit, which is “to make sure that we’re square about what it isn’t, what our expectations are not.”
Pompeo continued, “We’re not going to relieve sanctions until such time as we achieved our objectives. We are not going to do this in small increments, where the world is essentially coerced into relieving economic pressure.”

Pyongyang has been calling for a “phased and synchronized" approach toward denuclearization. The Trump administration has been maintaining a hard-line posture, emphasizing that it will adhere to its sanctions and pressure campaign until North Korea shows meaningful action.

On the prisoners held by North Korea, Pompeo said, “We have been asking for the release of these detainees for – this administration for 17 months.”

He added that this will be discussed in his meeting with North Korean officials and that it would “be a great gesture” if they choose to release the prisoners. He said he hoped Pyongyang would “do the right thing.”

Pompeo was also expected to return to Washington with an exact time and location for the Trump-Kim summit.

The Blue House also confirmed Wednesday that it was informed beforehand by the White House of Pompeo’s visit to Pyongyang. A Blue House official told reporters, “The White House NSC [National Security Council], timed with the departure of Secretary Pompeo, informed our government of his visit to North Korea.”

A Blue House official also told reporters in Seoul Wednesday that North Korea is expected to release three Americans it has detained, timed with Pompeo’s visit, saying he is expected to bring back a “date, time and captives.”

The return of the American prisoners would be a goodwill gesture ahead of the summit.

North Korean leader Kim held a summit with Chinese President Xi Jinping in the port city of Dalian during a two-day China trip that concluded on Tuesday, their second meeting in less than two months.

Pompeo tweeted that he was heading back to North Korean “at the invitation of the North Korean leadership” and that he looked “forward to planning a successful summit between President Trump and Kim Jong-un.”

Just ahead of Pompeo’s visit, Trump declared in Washington Tuesday that he was withdrawing from the landmark 2015 nuclear deal with Iran.

Trump broke news of Pompeo’s visit as he made the announcement to withdraw from the deal, adding it sends a critical message that, “The United States no longer makes empty threats. When I make promises, I keep them.”

“In fact, at this very moment, Secretary Pompeo is on his way to North Korea in preparation for my upcoming meeting with Kim Jong-un,” he continued. “Plans are being made. Relationships are building. Hopefully, a deal will happen and, with the help of China, South Korea and Japan, a future of great prosperity and security can be achieved for everyone.

John Bolton, the White House national security adviser, made a direct link between the Iran nuclear deal and North Korea during a press briefing Tuesday on Washington’s decision to withdraw from the Joint Comprehensive Plan of Action, signed in 2015 by Iran and China, France, Germany, Russia, the United Kingdom and the United States, lifting economic sanctions on Iran in return for restrictions on the country’s nuclear weapons program.

“I think another aspect of the withdrawal that was announced today is to establish positions of strength for the United States, and it will have implications not simply for Iran, but for the forthcoming meeting with Kim Jong-un of North Korea,” said Bolton. “It sends a very clear signal that the United States will not accept inadequate deals, as the president said.”