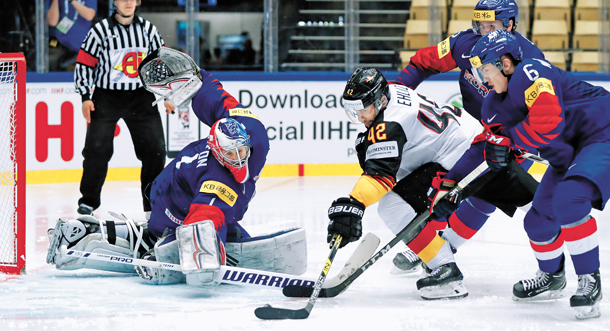 The 18th-ranked Korea lost to world No. 7 Germany 6-1 in Group B action at the International Ice Hockey Federation (IIHF) World Championship.

Canadian-born forward Brock Radunske scored Korea’s lone goal in the third period - the country’s second of the tournament - but it was way too little, too late against Germany at Jyske Bank Boxen. The shots were 42-26 in favor of Germany.

Germany entered this game with two shoot-out losses and one regulation loss, ahead only of Korea in the eight-nation Group B, and claimed its first win thanks to three power-play goals against the worst penalty-killing team in the tournament.

Korea, the lowest-ranked participant, earlier lost to Finland 8-1, to Canada 10-0 and to Latvia 5-0.

This is the highest level of the IIHF’s world championships, and Korea is making its first appearance after earning a promotion with a runner-up finish at last year’s Division I Group A tournament.

And Korea, coached by former National Hockey League (NHL) defenseman Jim Paek, appears in danger of getting relegated to the second-tier event. It remains the only Group B country without a point, with three matches left to play.

There are two groups of eight, and the last-place teams from each group will be relegated to Division I Group A in 2019. Since the IIHF adopted the current promotion-relegation system for its world championships in 2012, no nation has survived the top competition a year after getting promoted from Division I Group A.

Korea had been dreadful on special teams all tournament, and its woes continued against Germany, which opened the scoring with a first-period power play goal by Leon Draisaitl, the Edmonton Oilers forward with back-to-back 70-point seasons.

At the 10:02 mark, just eight seconds into the man advantage, Draisaitl snapped one from the top of the left circle, and the puck deflected off defenseman Kim Won-jun’s skate and bounced past goalie Matt Dalton.

Korea had a power play of its own late in the opening period, but Radunske wasted an open chance on the right wing when he rifled one well above Niklas Treutle in the German net.

Then, in the middle frame, Germany netted three goals to take control of the game.

Just 41 seconds into the second period, Yasin Ehliz scored on a rebound following Matthias Plachta’s shot on a power play. About nine minutes later, Patrick Hager made it 3-0 Germany with a slap shot from the point that traveled through traffic and past helpless Dalton, who had lost his stick seconds earlier.

Moments after that goal, Radunske fired another hard shot for Korea, this time coming down the left side, but Treutle was up to the challenge. With 8:28 left in the period, Lee Chong-hyun, playing in his first game of the tournament, was denied on the doorstep by the German netminder after Alex Plante set him up from behind the net.

About two minutes afterward, Germany made it 4-0 on a lucky bounce. After a Korean turnover, Marc Michaelis made a centering pass from the right side, and it hit Kim Won-jun’s skate and went right to Frederik Tiffels, who poked it home from the top of the crease. Korea went buzzing around the German net in the early moments of the third period, but came up empty-handed.

Then at 8:37 in the final period, Germany went up 5-0 with Ehliz’s second of the game, capitalizing on Korea’s inability to clear the defensive zone.

Draisaitl caused a turnover along the boards and fed the puck to Dominik Kahun, who then found unmarked Ehliz for a one-timer from the right circle.

It was Yannic Seidenberg’s turn to get on the board, as his point shot deflected off the stick of Park Jin-kyu and past Dalton.

Korea salvaged a goal on a power play at 17:01, when Radunske backhanded home a loose puck after Germany’s botched clearing attempt.

Korea has now given up a tournament-high eight power-play goals and no country has had to kill off more power plays than Korea’s 24.

Korea’s next game will be against the sixth-ranked United States on Friday. All Group B matches will be played at Jyske Bank Boxen.