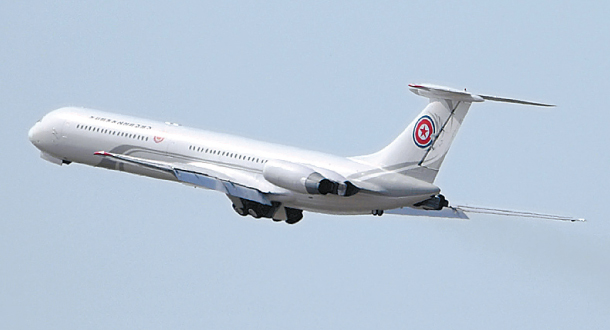 Kim Jong-un’s airplane, the Chammae-1, is an Ilyushin Il-62M jet that North Korea bought from the Soviets in 1982.[AP/YONHAP]

U.S. President Donald Trump announced on Thursday that he would meet North Korean leader Kim Jong-un on June 12 in Singapore for a landmark summit.

If it happens, the encounter will be the first between an American and North Korean leader.

“The highly anticipated meeting between Kim Jong Un and myself will take place in Singapore on June 12th,” Trump wrote on Twitter. “We will both try to make it a very special moment for World Peace!”

Singapore’s prime minister, Lee Hsien Loong, tweeted that the Trump-Kim meeting was a “significant step on the path to peace” and expressed hope for a successful outcome.

The Southeast Asian city-state was one of several candidate sites that Washington shortlisted in recent weeks, and it was ultimately chosen because of its ability to ensure security and neutrality for both countries’ leaders, said Raj Shah, the principal deputy press secretary at the White House.

Shah told reporters aboard Air Force One that the host country had a relationship with both the United States and North Korea and that Singaporeans have been “gracious up until now and also in the past,” The Straits Times reported.

The press secretary said the summit, as of now, will be a one-day affair. On Trump’s earlier remarks that the summit could be scuttled, Shah said there were a “number of things - provocative actions, for example” from North Korea that “would not be received well.”

“All I’ll say is that this meeting has been agreed to, but obviously it could be halted for any number of reasons.”

On what the White House expects from Trump’s first face-to-face meeting with Kim, Shah reiterated the administration’s stance that the goal is “complete, irreversible and verifiable denuclearization” of the Korean Peninsula.

Singapore has diplomatic relations with the United States and North Korea. It established ties with the North in 1975 at the same time as with the South. Until last November, when it severed all trade with the North in line with international sanctions, Singapore was North Korea’s seventh-largest trading partner and home to a number of North Korean trading and shipping companies.

For North Korea’s Kim, Singapore would make a safe travel destination if he were to fly on his private plane, the Chammae-1. North Korea bought the Ilyushin Il-62M jet from the Soviets in 1982. Produced from the 1960s through 1990s, an Ilyushin Il-62M normally has the capacity to fly 9,200 kilometers (5,700 miles).

Some analysts predict that Kim’s Chammae-1 might have deteriorated over the decades, and its current flight capacity might actually be 5,000 kilometers, still enough to fly to Singapore, which is about 4,800 kilometers away from Pyongyang.

North Korean state media has yet to confirm a date and location for the summit.

A Blue House official told reporters in Seoul on Friday that John Bolton, the White House national security adviser, had informed his South Korean counterpart, Chung Eui-yong, of the date and location on May 4, when Chung was visiting Washington.

According to the official, who spoke on the condition of anonymity due to the sensitivity of the issue, Singapore wasn’t a priority for either country. The United States was initially interested in Geneva, Switzerland, but the European country was ruled out because it was too far from Pyongyang. North Korea was eager to host the summit in its capital, but that didn’t work out either, the Blue House official said without explaining further.

For a while, the White House appeared interested in holding the summit at the same location where Moon and Kim held theirs on April 27. A day after the meeting, Trump called Moon and reportedly asked many questions about the border village of Panmunjom, where Moon and Kim met. Trump reportedly asked about the exact location of the conference buildings and whether they were capable of hosting meetings.

The business district of Songdo in Incheon was also mentioned during the phone conversation, the Blue House official said, but so briefly to the point that it “had no meaning.”

Moon has no plans so far to travel to Singapore on June 12 for the North Korean-U.S. summit.

The Blue House source did not explain why Panmunjom was ultimately taken off the list, but foreign media outlets have cited American officials saying they feared it would unnecessarily give the spotlight to Seoul.

On South Korea’s part, the Blue House wanted the Trump-Kim summit held in Panmunjom to open up the possibility of a separate trilateral summit including Moon. The Blue House official said Seoul was still open to holding a three-way meeting in Panmunjom, and that it preferred to hold such a summit as early as possible.

Possible venues for the Trump-Kim meeting in Singapore include the Shangri-La Hotel, Marina Bay Sands and Sentosa.

The Shangri-La Hotel hosts the International Institute for Strategic Studies’ annual Shangri-La Dialogue, a defense and security forum in Asia. It is also where Chinese President Xi Jinping and then-Taiwanese President Ma Ying-jeou held a historic summit in November 2015, the first such meeting between the two leaders in 66 years.

The Trump-Kim summit falls shortly after a meeting between Trump and Moon on May 22 and a Group of 7 summit in Canada from June 8 to 9.