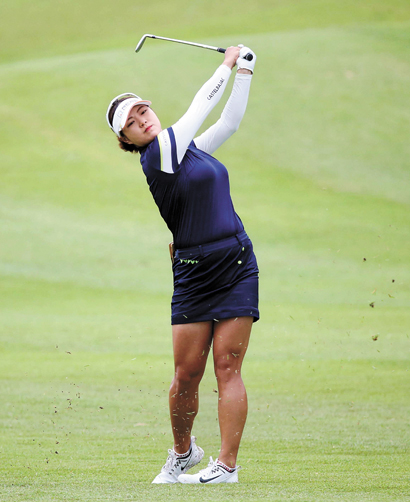 In Ju-yeon watches her shot during the final round of NH Investment & Securities Ladies Championship at Suwon Country Club in Gyeonggi on Sunday. [YONHAP]

In Ju-yeon picked up her first-ever KLPGA Tour victory on Sunday, winning wire-to-wire at the 2018 NH Investment & Securities Ladies Championship at Suwon Country Club in Gyeonggi. 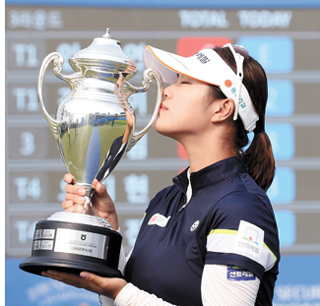 In Ju-yeon kisses the trophy after winning the tournament on Sunday. [YONHAP]

In, who started the final round with a two-shot lead in the field, shot an even-par to finish the tournament at nine under par, tied for the lead with Kim So-yi. Despite her two-shot lead, In got off to a shaky start, shooting two over par in the front nine with two bogeys, two birdies and a double-bogey. Though she lost her lead after the first nine holes, In quickly got herself back in the lead with two birdies in the back nine.

As both In and Kim made pars on the first playoff hole, the two players had to play the par-4 18th hole again. After Kim left herself with a downhill putt on the green, In’s second shot landed just short of the hole, leaving herself a better chance of a birdie with an uphill shot. Kim missed her birdie putt and In made the uphill birdie putt to finally win her first KLPGA Tour event.

“I got really nervous in the beginning but I kept on reading ‘don’t get nervous,’ which I wrote on my yardage book,” In said.


In played KLPGA Tour events on the weekends, and on weekdays, she played Dream Tour events. It may have been a rough schedule, but her plan worked out perfectly, as she failed to finish inside top-60 in the money list last season but she was still able to secure KLPGA Tour status. As she competed in 25 events last year, In missed 11 cuts, leading her to finish 71st in the money ranking. However, as she finished second in the money ranking on the Dream Tour, she was able to secure her KLPGA Tour status for this season, as the top 10 Dream Tour earners are invited to the KLPGA. This season, In is only focused on playing KLPGA Tour events.

“My parents were the first thing that came to my mind,” In said. “I want to play better and make my parents happier.” 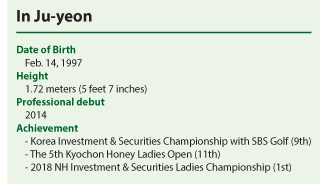 With her victory, In took home prize money of 140 million won ($131,290), moving up to fourth in the season prize money standing.

Kim had to once again walk away from a victory, as she lost in the second playoff hole. Throughout her five seasons on the KLPGA Tour, Kim hasn’t won a tournament.

Lee Jeong-eun, who won four tournaments last season and was the KLPGA player of the year, withdrew from the tournament after the first round for the first time in her KLPGA Tour career due to muscle pain in her right arm.

The KLPGA Tour will continue at the 2018 Doosan Match Play Championship at Ladena Resort in Chuncheon, Gangwon, from May 16 to 20.