The Doosan Bears have had to make some room at the top, as the SK Wyverns have moved back into joint first place for the first time since April 28. 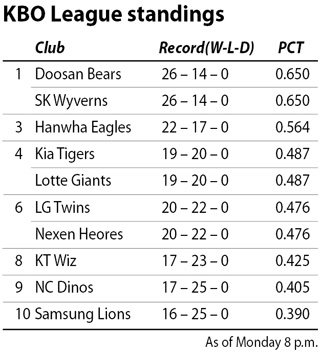 With solo home runs from Michael Choice and Lim Byeong-wuk, the Nexen Heroes successfully defeated the Doosan Bears 2-1 at Jamsil Baseball Stadium on Sunday. Against the Bears’ strong batting lineup, the Heroes’ starter Choi Won-tae had quite an impressive game, giving up one run and three hits in seven innings.

At the bottom of the ninth, the Heroes’ closer Cho Sang-woo allowed a two-base hit to Kim In-tae, but successfully struck out Park Kun-woo and Kim Jae-hwan to secure the Heroes’ win. With the loss, the Bears are now in a three-game losing streak for the first time this season.

The Lotte Giants are also on the move, creeping back up the table as the season nears the halfway point. By defeating the KT Wiz 3-1 on Sunday, the Giants are now tied for fourth in the standing, quite a surprise as the team has spent most of the season at the bottom of the table. Though Saturday’s game was canceled due to rain, the Giants are on a three-game winning streak.

Over in Daegu, the Kia Tigers had a thrilling 8-7 victory against the Samsung Lions to secure fourth place.

Until the bottom of the third, it seemed as if the game was going in the Lions’ favor, as they had a big 7-3 lead. But everything went wrong after three innings, as they failed to add another run and the Tigers slowly caught up by scoring five in four innings, from the fifth to eighth.

While holding a one-run lead at the bottom of the ninth, Lim Chang-yong successfully tossed a scoreless inning to pick up a save, becoming the oldest pitcher in the KBO to do so at 41.

The Hanwha Eagles defeated the NC Dinos 4-0 to hold third in the standing. The Eagles have now held third for two weeks, an impressive feat for a team that hasn’t thrown a single postseason pitch for a decade.

The Eagles got off to a quick start by scoring three runs only in the first inning. Then, by adding another run at the bottom of the third, the Eagles redeemed themselves from their loss against the Dinos on Friday.

Aside from that game, the Eagles had their fourth sellout crowd of the season, the most among the 10 clubs. 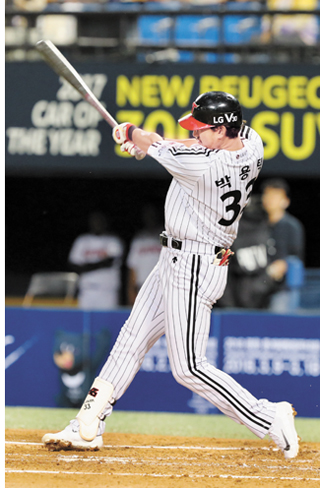 Currently, Yang Joon-hyuk holds the record in the KBO for the most career hits, at 2,318, but that might change soon as Park is fast approaching the record with 2,272 hits after the weekend.

As of Sunday’s game, Park has made 47 hits in 41 games this season. All he has to do is make another 47 hits in the remainder of the season - and there’s still more than enough games left - to set a new career hits record.

After graduating from Huimoon High School, Park attended Korea University. Upon graduation, Park joined the KBO, making his debut with the LG Twins in 2002. Though Park is a franchise star, it wasn’t until the 2009 season that fans really started to take notice. The 2009 season was Park’s first with a batting average higher than 0.300. Since then, Park has managed to keep his batting average above 0.300 for nine straight seasons.

Upon completion of the 2017 season, Park was one of few veteran players that got to stay with the Twins, as the club controversially released the majority of its older players to encourage a generation shift under manager Ryu Joong-il.