Jeonbuk advances to the AFC quarterfinals

Jeonbuk advances to the AFC quarterfinals 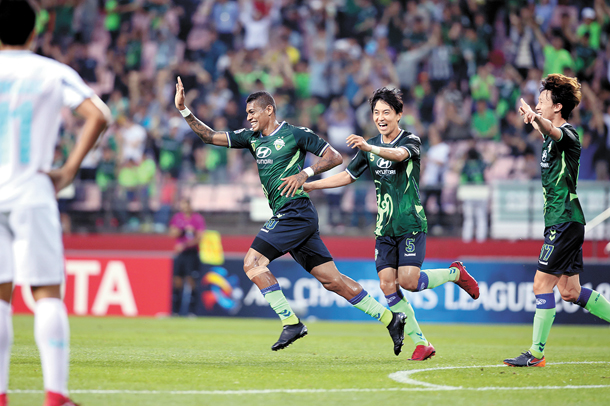 Jeonbuk Hyundai Motors players celebrate after scoring a goal in its AFC Champions League round of 16 match against Buriram United on Tuesday. [K LEAGUE]

Ricardo Lopes and Lee Jae-sung scored one goal apiece at Jeonju World Cup Stadium in Jeonju, North Jeolla, to help Jeonbuk defeat the Thai powerhouse in the second leg of their AFC round of 16 match. The win lifted the K League 1 club to the last eight with a 4-3 aggregate record. Jeonbuk last week suffered a 3-2 loss to Buriram.

Towering striker Kim Shin-wook had a promising chance to put Jeonbuk on the board first in the 13th minute when he fired a strike in the box off a pass from Lee Seung-gi, but his attempt was denied by Buriram goalkeeper Sivarak Tedsungnoen. One minute later, Kim unleashed a right-footed shot, again from the box, that went straight to Sivarak.

Jeonbuk, however, made a breakthrough in the 18th with Lopes’ goal. The 27-year-old Brazilian buried a volley off of Kim’s headed pass and put the hosts up by one.

Choi Kang-hee’s side could have doubled their lead in the 27th when Lim Seon-yeong’s pass found Lee Jae-sung alone in the center of penalty area, but the reigning K League MVP’s close range effort was tipped away by Sivarak. In the 29th, Lim volleyed off a cross from Lee Jae-sung in the box, only to have it go wide of the net.

Buriram’s Jakkaphan Kaewprom nearly stunned Jeonbuk fans in the 45th. Following a headed pass by Edgar Silva, he took the ball and fired a right-footed strike, but his attempt hit the post.

Jeonbuk kept knocking on the doors of Buriram early second half, but couldn’t find the back of the net. Lopes and Lee Seung-gi fired shots in the 50th and 52th, respectively, but both attempts couldn’t get past Sivarak.

In the 67th, Jeonbuk replaced Lee Seung-gi for Lee Dong-gook, the AFC’s all-time leading scorer, to beef up their attack.

In the 77th, Kim met Choi Chul-soon’s fine cross, but his close-range header was somehow saved by Sivarak. In the 81st, Lopes fired a right-footed strike following a pass from Lee Dong-gook that went for a corner.

Jeonbuk finally earned their second goal in the 84th to seal their victory. Lee Jae-sung’s curling left-footed free kick sailed over the wall and found the net, with Sivarak left helpless.

Jeonbuk head coach Choi said his side had confidence they could reach the quarterfinals even with a 3-2 deficit from the first leg.

“We were confident that we could make a turnaround at home even though we lost in the first leg,” he said. “Today’s match was a match where the players’ mentality really mattered.”

Choi said he doesn’t care what team they will face in the next round.

“What’s important is that we need to be prepared and build our teamwork,” he said. “For important matches, our concentration level gets high, so I’m not worried about the quarterfinals or the semifinals.”