At a summit with U.S. President Donald Trump at the Mar-a-Lago resort in Palm Beach, Florida, last month, Japanese Prime Minister Shinzo Abe underscored the need for upholding the principle of CVID — complete, verifiable and irreversible dismantlement of North Korea’s nuclear weapons. Trump turned to Abe with a blank expression and asked what CVID meant.

Abe hid his shock and calmly explained the concept. Walking out of the conference room, the Japanese prime minister whispered to his aide, “Does he seriously not know what CVID is?”

Abe was struck by other strange remarks by his host. Trump found fault with Japan’s trade surplus with the United States and also warned that Washington would have to re-evaluate the shared cost of the U.S. military’s presence in Japan. Abe reminded him that the cost had been already agreed to. Trump bluntly told his Japanese friend that he liked him and his country, but he admired Xi Jinping of China most among state leaders.

Abe was shocked because he had been sought out by Trump on global affairs since the U.S. president took office. Trump was carefree with his casual remarks and walked out side by side with his Japanese guest, oblivious to his puzzlement. 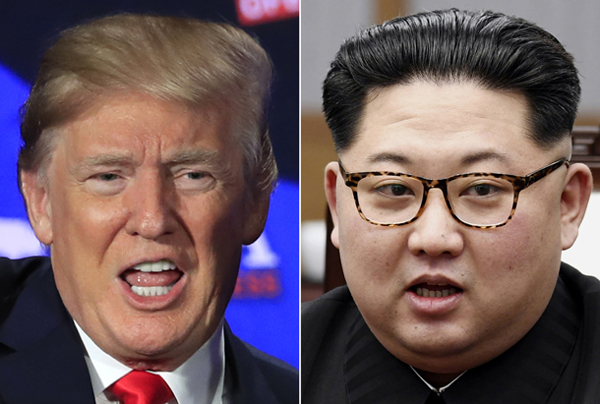 U.S. President Donald Trump, left, and North Korean leader Kim Jong-un will have a summit in Singapore on June 12. [AP/YONHAP]

Experts believe Trump will be as straightforward in his sit-down with North Korean leader Kim Jong-un in Singapore on June 12. He will most likely skip the usual diplomatic niceties and get straight to the point. He is expected to drive a hard bargain. Topics could jump from here and there. That could be both bad and good news for us.

Trump may have already struck a deal with his new best friend Xi. After his Secretary of State Mike Pompeo returned from a visit to Pyongyang, Trump mentioned the goal of denuclearizing the Korean Peninsula — instead of denuclearizing North Korea. In a cabinet meeting, Trump thanked Xi, raising speculation that Washington may be studying the option of scaling down or pulling out U.S. troops from South Korea, which was what Pyongyang and Beijing had long called for.

Pompeo promised to North Korea that the United States will help it achieve economic prosperity — only if North Korea gives up its weapons program. John Bolton, Trump’s national security adviser, detailed the terms of dismantlement: getting rid of all nuclear weapons and delivering them to a nuclear research facility in Oak Ridge, Tennessee.

The Korean media went wild over the toughness of the denuclearization scheme and the rewards being offered, which could benefit the North but also the South. The U.S. media and influential figures stayed skeptical. They know that Pompeo’s commitment is only being laid out for leverage in the upcoming summit. The denuclearization process cannot be that easy; no one’s popping any champagne corks anytime soon.

But few doubt the showdown between Trump and Kim will lead to something. The meeting will be carefully choreographed, but the problem is the next stage. Any agreement may be ceremonial. But what Washington wants at the end of the day is clear — complete denuclearization.

It won’t lift sanctions as long as it is not convinced that the recalcitrant regime in Pyongyang has become nuclear-free. Even if Trump wants to lift the sanctions before the completion of denuclearization, the U.S. Congress, which is harsh on North Korea, won’t agree. The deal could be broken at any time. That is why the U.S. media advises against investors rushing to North Korea.

But sentiment in the South is quite different. The focus is already on an era of post-sanctions North Korea. Seoul seems to believe that Pyongyang is sincere this time about denuclearization. The South Korean government and enterprises are already excited about resources-rich North Korea being the next destination for foreign capital.

What is urgent is stopping North Korea’s nuclear capabilities. Casual talk of a McDonald’s in Pyongyang can come later. We must concentrate on a serious — and feasible — plan to denuclearize North Korea.