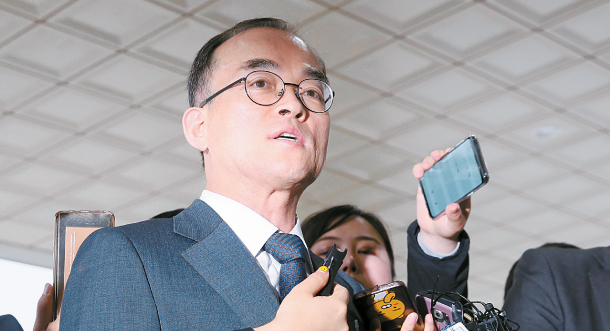 Justice Minister Park Sang-ki on Wednesday expressed regret over internal division within the state’s top investigative body over a corruption case about hiring practices at the only casino where Koreans can gamble.

Speaking to reporters at the government complex in Gyeonggi, Park said it was “regrettable” that opinions of prosecutors have been revealed via media reports about the casino company case, referring to an unusual rebuke of top prosecutor Moon Moo-il by his subordinates.

“As for the investigation into [casino company] Kangwon Land, I think it should proceed in a swift and thorough manner so that unnecessary controversy might be put into rest,” said the minister, adding that he called on Prosecutor General Moon Moo-il to expedite the investigation.

An internal rift between Moon and his team investigating dubious hiring practices at Kangwon Land was made public Tuesday despite a top-down, hierarchical culture that usually does not allow disputes or differing opinions among the elite investigative body members.

The team investigating hiring at Kangwon Land issued a statement Tuesday accusing Moon of interfering in its probe using his clout as top prosecutor.

Kweon is accused of pressuring the casino company to hire his acquaintances, including his aide.

The team contends that when it reported to Moon that it would apply for a pre-trial detention warrant for Kweon, a three-term lawmaker, on May 1, Moon directed it to have its warrant request reviewed by an advisory panel comprised of outside experts, a move the team viewed as an attempt to influence the probe.

“In a reversal of his earlier promise made at the launch of the probe team [that he would respect its investigative independence], the prosecutor general ordered it to form an advisory panel at the Supreme Prosecutors’ Office to determine whether the detention warrant was necessary,” said the inquiry team, led by Prosecutor Yang Bu-nam, in a statement.

As for the pre-trial detention warrant for Rep. Kweon, the probe team said it had conveyed to Moon on May 10 that a panel’s review into the case would not be appropriate as it could leak information, to which Moon agreed. It said it will soon apply for the detention warrant.

The team also contended that Moon rejected its demand to form an internal deliberation committee to review possible abuse of power by senior prosecutors suspected of hampering the probe into Kangwon Land.

The team was set up in February as a form of damage control mode after a prosecutor named Ahn Mi-hyun revealed that higher-ups interfered in her investigation into Kangwon Land.

At the team’s launch, the Supreme Prosecutors’ Office promised it independence, even saying the team wouldn’t have to report its progress to it.

Making things worse for Moon, Ahn held a press conference Tuesday and revealed that her own plan to question Rep. Kweon was scuttled last December because Moon voiced his opposition during a meeting with Lee Young-joo, head of the Chuncheon Prosecutors’ Office, Ahn’s superior.

Moon allegedly told Lee that prosecutors could only summon a sitting lawmaker for questioning when there was substantive evidence for indictment. In a direct rebuke of Moon, Ahn said an order that prevented her from questioning Kweon was “hard to understand.”

Following Ahn’s public rebuke, Moon admitted Tuesday he reprimanded his subordinates last year over the direction of the probe, but said it was part of a “democratic process to have differing opinions.”

But damage to Moon’s leadership has already been done, raising questions over whether he can continue to lead the elite body.

Allegations against him are especially damaging because Moon promised investigative independence for prosecutors when he assumed office last July.

He also stressed the importance of prosecutors’ fairness in pursuing cases. To that end, he issued an instruction last November that junior prosecutors keep records of every order issued by superiors.