Korea rockets into the cosmos

Korea rockets into the cosmos 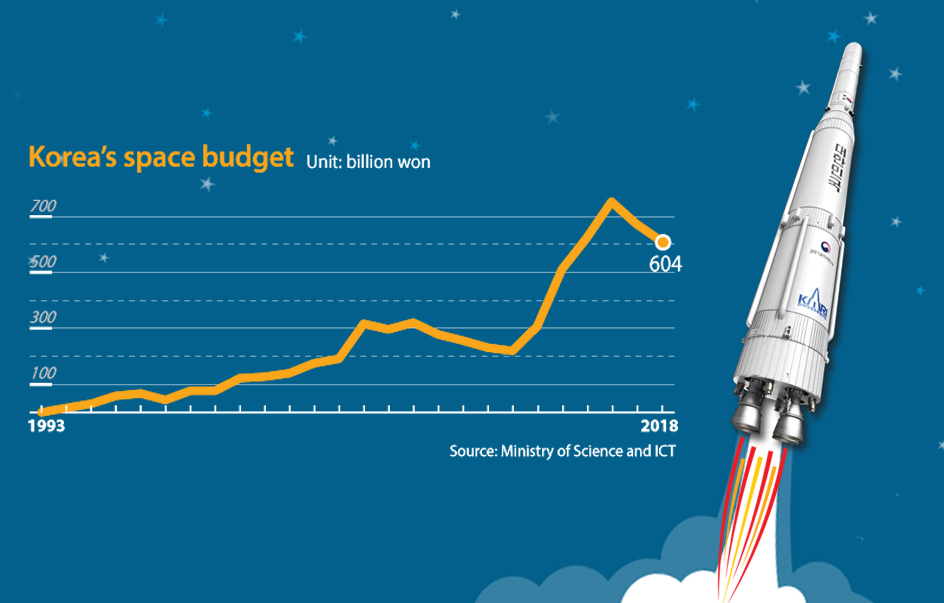 GOHEUNG, South Jeolla - The Naro Space center is perched on a hill overlooking the turquoise ocean in the far south of the Korean Peninsula. In this idyllic landscape, a test of a roaring 75-ton rocket engine might seem out of place. But it happens here every week.

The liquid fuel engine, designed and developed by Korean scientists in partnership with 19 local companies, will be the gem of the Korea Space Launch Vehicle (KSLV)-II, which the country is planning to launch into low Earth orbit in February and October 2021.

For the past two years, around 290 scientists at the Korea Aerospace Research Institute (KARI) have been commuting back and forth between its headquarters in Daejeon and the space center in South Jeolla to improve the engine, which uses kerosene and liquid oxygen.

The engine has been tested more than 75 times for a total of 5,420 minutes under varying conditions. The engine will continue to be tested until it is attached to a launch vehicle and sent into space less than three years from now.

Before then, Korea’s space program, which has kept a low profile since it successfully launched its first carrier rocket KSLV-I, better known as Naro, is set to take the spotlight.

A test flight for the engine in the form of a two-stage launch vehicle is scheduled for October.

A rocket of one’s own

Korea launched the KSLV-I rocket, which carried the 100-kilogram (220-pound) Science and Technology Satellite 2C (STSAT-2C) into orbit, on Jan. 30, 2013 after two failures and several delays. Even though the event was hailed as the first successful launch of a Korean-made space vehicle, the two-stage vehicle actually borrowed from Russian technologies for its first-stage booster. The KSLV-II is fully developed with Korean technologies, which carries symbolic importance.

“We began developing the KSLV-II with the goal of securing our own launch vehicle based on the experience with the KSLV-I,” said Park Jeong-joo, director of Naro Space Center. “But we had to overcome a range of technological barriers, such as engine combustion instability, and we made numerous design and structural changes.”

The KSLV-II is a three-stage launch vehicle as tall as a 15-story building that will put a 1.5-ton multipurpose satellite into low orbit at 600 to 800 kilometers (372 to 497 miles) above the Earth. The first-stage booster, located at the bottom of the rocket, will consist of four 75-ton fuel engines, and the second stage will be made up of a single 75-ton engine. The third stage will come with a 7-ton liquid engine. The Ministry of Science and ICT and the KARI are currently accepting applications to name the vehicle from everyone in Korea until May 31. The name Naro for the KSLV-I also came from such a contest. 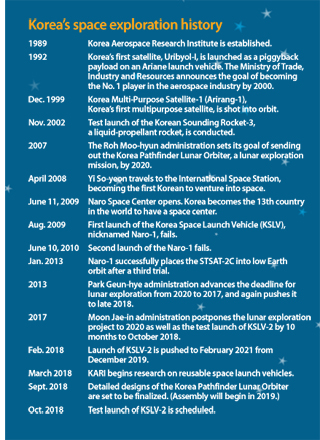 The KSLV-II’s test vehicle is relatively simple. It will consist of a single stage - the 75-ton rocket engine being tested now. It will be only 26.1 meters (86 feet) tall and carry no payload and will blast just 170 kilometers into space - much lower than the actual rocket.

Through the test flight, researchers may check the speed, acceleration, curve and the influence of acceleration on all the components.

Not all launch vehicles go through the kind of test flights that Korea is set to begin. Some countries go ahead with initial launches without these interim tests.

“The structure of the actual launch vehicle and the test vehicle is different, and both take up time and money,” said Tahk Min-jea, professor at the department of aerospace engineering at the Korea Advanced Institute of Science and Technology. “Small rockets to deploy mini satellites don’t really require the test. But Korea has the ambitious goal of exploring Mars in the end, and a large-scale launcher is necessary.”

Professor Tahk said that space development was backwards in Korea from the beginning.

“Most other countries develop launch vehicles first, and satellites come next,” he said.

Korea first shot its first satellite, Uribyol-I, into space on Europe’s Ariane launch vehicle in 1992. That was 11 years before Naro’s launch. Today, more than a dozen Korean satellites - ranging in purposes from scientific research to telecommunications broadcasting and meteorological, disaster and defense monitoring - are currently in orbit around Earth.

Behind all this is the divided Korean Peninsula. Back in 1972, President Park Chung Hee established the Agency for Defense Development and ordered the development of the Baekgom, or “white bear,” missile. The surface-to-surface missile, based on the U.S. Nike-Hercules rocket, was the first that Korea developed on its own. Korea conducted a successful test of Baekgom, but the United States intervened and inked an agreement with the administration of Park’s successor, Chun Doo Hwan, that imposed a limit on the range of South Korean missiles to 180 kilometers. That barred Korea from space development until 1999, when the two governments changed that range to 300 kilometers.

When it comes to launch vehicles, Korea lags behind other Asian competitors, Park said. Japan and China launched their rockets into orbit in the 1970s, and India followed suit in the 1980s.

Korea isn’t in such a bad situation, though, according to Chang Young-keun, a professor of aerospace and mechanical engineering at the Korea Aerospace University. Not all economic powerhouses have space programs: Sweden and Singapore don’t, for instance.

As of 2016, Korea had the seventh-largest space budget in the world, at $671 million, according to Euroconsult. Even that amount is just 1.9 percent of what the United States, the No. 1 space powerhouse, spends.

When the space budget is calculated as a percentage of the gross domestic product, Korea was behind Japan and India. But the Korean government drastically increased its space budget 2014 to 510.2 billion won ($472.6 million) from 337.2 billion won in 2013 after the Park Geun-hye administration took power.

It set the ambitious goal of sending a lander to the Moon, a feat already accomplished by Japan, China and India, by 2020. The budget grew to 624.9 billion won in 2015 and has stayed at a similar level ever since, even though Korea’s space program has faced delays and changes big and small.

Rocketing to the future

If Korea successfully launches the KSLV-II in its two attempts in 2021, aerospace experts say it will be lucky. It normally takes five test rounds to see a success, according to Chang.

“When a country succeeds in lifting off a launch vehicle, it’s comparable to a university graduate kicking off their professional career,” said Tahk. “No one will be willing to let a novice carry a satellite that costs at least 250 billion won. Korea needs to build up a career with smaller satellites and raise its success rates over time.”

Currently, dominant space launch vehicles, such as Europe’s Ariane and SpaceX’s Falcon 9, boast a success rate of over 95 percent.

“We need to be more generous with failure and time to let the space industry blossom,” Tahk said.